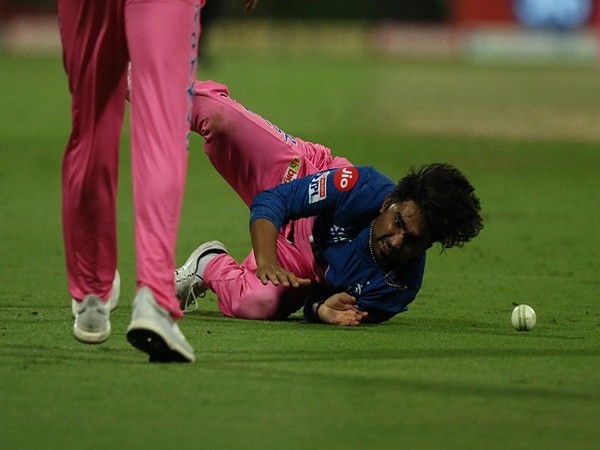 Abu Dhabi [UAE], October 31 (ANI): Rajasthan Royals thrashed Kings XI Punjab on Friday to keep their playoffs hopes alive and all-rounder Rahul Tewatia reckons that it was a do or die game for his side.
Chasing a colossal target of 186, Ben Stokes provided the flying start for the Royals. Stokes smashed 50 off 26 balls studded with three sixes and six fours. It was an all-round performance by the Royals' batsman as they sealed a comfortable win.
"Overall the performance was, we showed intent in the field. It was a do or die game so we had to give 100 per cent. And the way Jofra started, we gained momentum at that point," said Tewatia in the post-match press conference.
Ben Stokes took a brilliant catch to dismiss KXIP batsman Mandeep Singh in the very first over. Tewatia himself took a stunning catch and ended Nicholas Pooran's cameo in the 18th over.
"Our batters are taking responsibility. Initially, we were losing wickets in the powerplay but it isn't the case anymore. We concentrated on fielding during our practice and Ben Stokes fielded very well and took a brilliant catch. He is one of the best fielders of our team," said Tewatia.
"Talking about my catch, I was right at the boundary rope and I made my jump at the right time to take the catch," he added.
Tewatia feels the Royals' middle order has become strong as they are now getting a good start up the order.
"Our middle order has become strong because of the top order performance and the way Stokes has been providing us with starts it is a really a positive sign," said Tewatia.
The Royals are now at fifth in the points table and will next lock horns with Kolkata Knight Riders (KKR) on Sunday. (ANI)

Ahmed Patel was a tremendous asset for Congress; Rahul, Priyanka, others pay tribute

A Gandhi family loyalist, Ahmed Patel was the go-to man in Congress