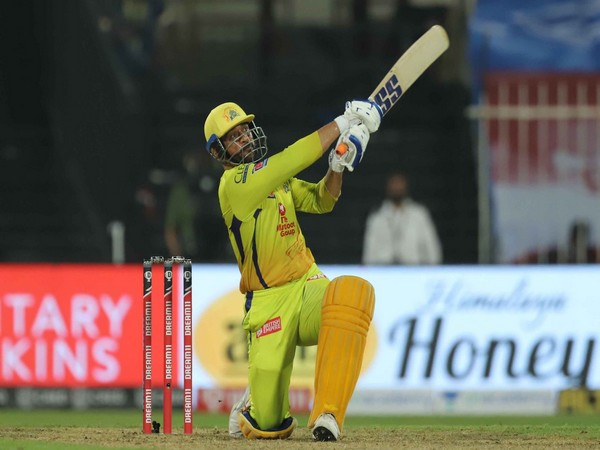 Sharjah [UAE], September 23 (ANI): A fan outside Sharjah Cricket Stadium got lucky as he was able to take the cricket ball home after MS Dhoni's six landed outside the stadium.
While chasing 217, Dhoni's six landed outside the stadium, and the camera followed the ball and it was then revealed that a fan picked it up and took the ball with him.
As soon as the man picked up the ball, he started walking briskly with a smile on his face.
Indian Premier League's official Twitter handle posted a small video of the incident and captioned the post as: "He's one lucky man. Look who has the ball that was hit for a six by MS Dhoni."
Chennai Super Kings suffered a 16-run loss against Rajasthan Royals in the Indian Premier League (IPL) on Tuesday.
Dhoni turned up to bat in the 14th over of the innings with CSK at 114/5 when the side still needed 103 runs for the win and many pundits and experts have said that the CSK skipper should have come in earlier.
In the end, the CSK remained unbeaten on 29 runs off 17 balls. Dhoni found going a little tough initially as he was able to score just nine runs off his first twelve balls, but in the final over as CSK needed 38 to win, Dhoni was able to smash 20 runs, including three sixes.
For CSK, Faf du Plessis top-scored after playing a knock of 72 from just 37 balls. The MS Dhoni-led side posted 200 in the end, but they still lost the match by 16 runs.
Earlier, Sanju Samson had played a knock of 74 runs from just 32 balls to take Rajasthan Royals' total to 216/7 in the allotted twenty overs. Skipper Steve Smith also registered 69 runs.
The game-changing moment had come in the final over of Rajasthan's innings as Jofra Archer smashed CSK's Lungi Ngidi for 30 runs.
CSK will next take on Delhi Capitals on September 25 while Rajasthan will face Kings XI Punjab on September 27. (ANI)