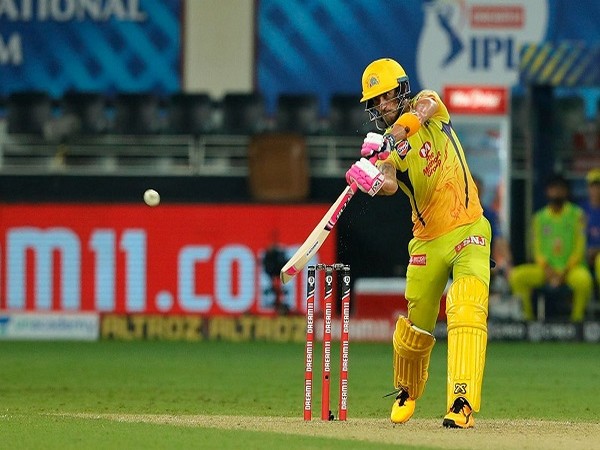 Dubai [UAE], October 5 (ANI): Chennai Super Kings' opening batsman Faf du Plessis has credited skipper Mahendra Singh Dhoni and coach Stephen Fleming for sticking with the players for a longer period of time than any other Indian Premier League (IPL) franchise.
CSK secured the second win of the tournament in their fifth game on Sunday after losing three consecutive matches.
Chasing a moderate target of 179, CSK openers Shane Watson and Faf du Plessis handed a comfortable win as they had an unbeaten partnership of 181 runs. The duo smashed Punjab bowlers all around the ground.
"Yeah it's going well. I think the big thing for me is that I'm there at the end. It's been a big focus for me to try and convert better. Grateful that we could get the partnership going tonight," Du Plessis told the host broadcaster Star Sports after the match.
"I thought the previous game we were much better bowling, our team balance was better, but we didn't bat well. With batting it's confidence so we just wanted to make sure the batsmen get some confidence. Hopefully, surely but surely, our players can find form maybe towards the next few games," he added.
Watson had a bad start to the with the opener scoring just 52 runs in the four matches. However, he found the form against KXIP smashed 83 runs off 53 balls including three sixes.
"Credit to Dhoni and Fleming, it's obviously the CSK way, they stick with players a bit longer than other teams might," said Du Plessis
"They stick with players that they feel will play in the final. Credit to the management. It's not always as easy as it looks," the former South African skipper added.
CSK will now play against Kolkata Knight Riders in Abu Dhabi on October 7 while Punjab will take on Sunrisers Hyderabad in Dubai on October 8. (ANI)