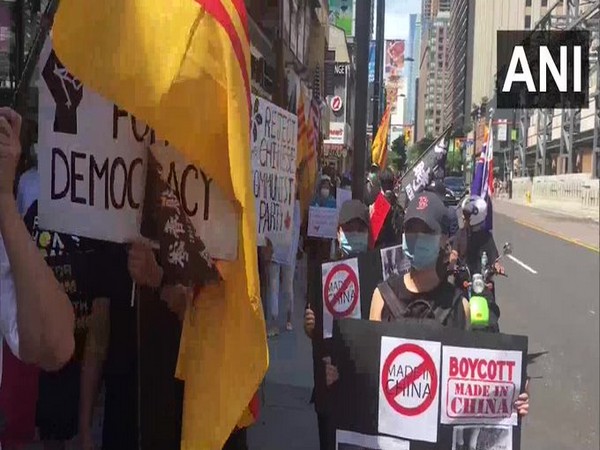 Toronto [Canada], Aug 2 (ANI): Urging international communities to tackle Chinese oppression, Indian, Tibetan, Vietnamese and Taiwanese diaspora took part in a protest against China in Toronto on Saturday.
The protest was organised by Canada-Hong Kong Link, Bangladesh Minority Rights Alliance, Indian, Tibetan, Vietnamese and Taiwanese diaspora.
The demonstrators were seen holding flags of the US, Tibet and India. They also raised slogans in support of India and Prime Minister Narendra Modi.
Many held placards and banner against the Chinese government. They raise the issue to the treatment meted out on Uighur Muslims by the Chinese Communist Party.
One of the posters read “Help stop Uyghur Forced Labour”. Another read “Fight for democracy”.
“India the greatest democracy on the face of the Earth. India the shining light to the world. I want to thank Prime Minister Modi for setting an example to the world on how to confront evil China,” said a protestor.
Another protestor said that China has taken control of Hong Kong people through new security law.
“We stand with people of Taiwan, Hong Kong, Vietnam and India. We stand with countries around the world which have been under its (Chinese) oppression,” said the protestor.
“Now the Chinese regime is taking total control of Hong Kong people,” she added. (ANI)