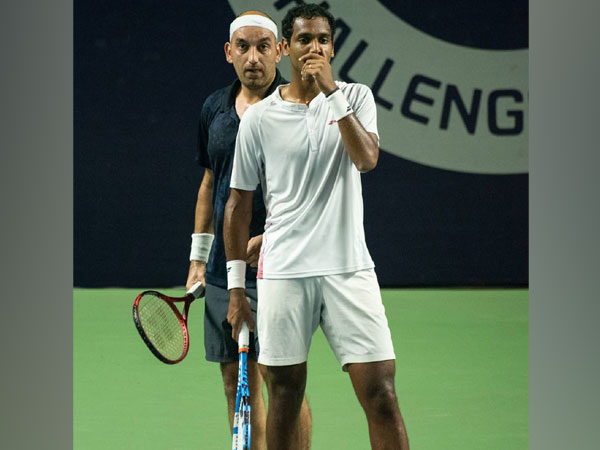 Alicante [Spain], October 15 (ANI): Indian tennis duo of Purav Raja and Ramkumar Ramanathan progressed to the quarter-finals of the Ferrero Challenger Open doubles event with a comfortable 6-4, 6-0 win over Spain's David Marrero and Serbia's Nenad Zimonjic here in Alicante on Wednesday.
Playing against lower-ranked wild card entrants Marrero and Zimonjic, the Indians took control of the match from the beginning.
Raja-Ramkumar won a total of 56 points against 37 by their opponents and were able to create and win more break point opportunities - five out of 12 than Marrero-Zimonjic's one break out of the four.
The dominance of Indians in the match was highlighted by the first serve winning percentage of 89 to 46 by their opponents.
The Indian pair of Raja-Ramkumar has had a good start to the 2020 season when they lifted the winners' trophy beating the team of India's Leander Paes and Australia's Matthew Ebden at Bengaluru Challenger in February.
This week in Alicante, the duo -- Raja and Ramkumar has resumed competing together in doubles after the unprecedented hiatus in the sport due to the COVID-19 outbreak.
The all Indian partnership has become a formidable force in doubles in the past one year. Since November 2019, Raja and Ramkumar have notched up three ATP Challenger Tour titles (Kobe, Pune and Bengaluru) and reached the semi-finals of the ATP Tour 250 event - Tata Open Maharashtra in Pune earlier this year.
In the quarter-finals at Alicante, Raja-Ramkumar will go head to head against local lads Gerard Granollers and Pedro Martinez later in the day.
N Sriram Balaji, the third Indian in the doubles draw, along with his Swiss partner Luca Margaroli will take on the French duo of Enzo Couacaud and Albano Olivetti right after the Raja-Ramkumar quarter-finals' tie. (ANI)