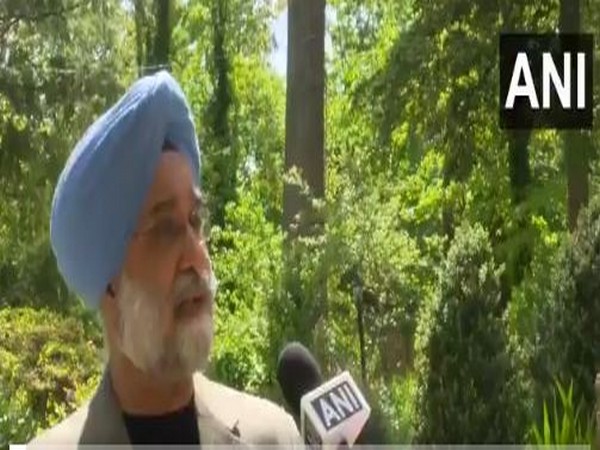 By Reena Bhardwaj
Washington DC [USA], Aug 8 (ANI): Ambassador of India to the United States Taranjit Singh Sandhu and Governor of Pennsylvania Tom Wolf discussed important areas of the vibrant India-Pennsylvania relationship, encompassing economic and people-to-people ties during a conversation on Friday.
Ambassador Sandhu and Governor Wolf discussed the ever-increasing trade and investment complementarities in the India-US relationship and cooperation in the fields of education and healthcare. Ambassador shared with the Governor the latest developments in the Indian healthcare and education sectors, including recent reform initiatives taken by India.
"Both noted the important contributions, especially in economy, of over 200,000 members of the Indian diaspora in Pennsylvania, including those of nearly 10,000 Indian students in Pennsylvania's higher education institutions. Ambassador highlighted the new opportunities available for investments in India's higher education sector under the New Education Policy recently announced in India," read a press release from the Indian Embassy.
"Wonderful conversation with Governor Tom Wolf of Pennsylvania on our strong economic partnership and the important contributions of the Indian diaspora and Indian companies. Discussed the potential for collaboration in higher education; STEM areas; life sciences and health," Sandhu tweeted.
According to the release, the total trade between India and Pennsylvania has grown to USD 3.21 billion (2019).
"Today over 18 Indian companies, with investments of USD 540 million, are supporting 3,000 jobs in Pennsylvania. Many Pennsylvania based US companies spread across Food Processing, Agriculture, IT, and Chemicals sectors are present in India. Some notable investments include Hershey's, Kraft Heinz, Unisys, Air Products and Chemicals, FMC among others."
Indian entrepreneurs and professionals "have a significant presence" in Pennsylvania in the IT and telecommunications, life sciences and manufacturing sectors. Indian high skilled talent adds to the competitive edge of the US economy.
Ambassador Sandhu and Governor Wolf "agreed to work together" to further enhance the India-Pennsylvania relationship. (ANI)