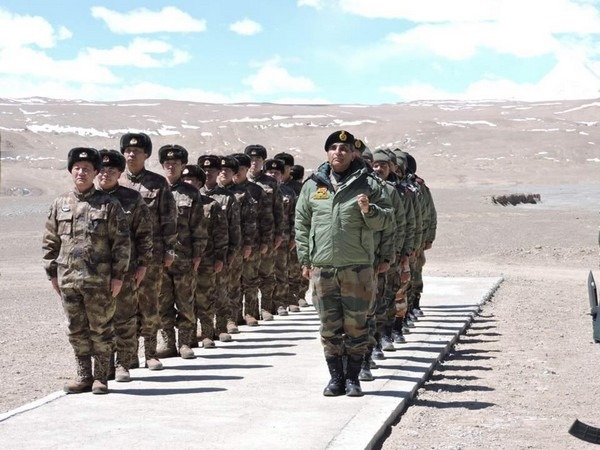 New Delhi [India], September 8 (ANI): Armies of India and China continue to communicate with each other even as Chinese troops are in a face off position with Indian troops near the Rezang La heights, Indian Army sources said.
Chinese soldiers fired in the air while attempting to close in on Indian positions across the Line of Actual Control (LAC) in Eastern Ladakh on Monday night, the Indian Army said today adding that Chinese PLA troops has been "blatantly violating agreements and carrying out aggressive manoeuvres."
In a detailed statement the Army said on Tuesday that the Chinese troops yesterday were "attempting to close-in with one of our forward positions along the LAC and when dissuaded by own troops, PLA troops fired a few rounds in the air in an attempt to intimidate."
"It is the PLA that has been blatantly violating agreements and carrying out aggressive maneuvers, while engagement at military, diplomatic and political level is in progress," the Indian Army said.
The Army's statement came after China claimed that Indian troops "illegally crossed" the LAC near Pangong Tso on Monday and accordingly Chinese troops were forced to take "countermeasures" to stabilise the situation.
It added that despite this provocation, the Indian troops exercised great restraint and behaved in a responsible manner.
"Indian Army is committed to maintaining peace and tranquility, however, it is also determined to protect national integrity and sovereignty at all costs," it further said and refuted the statement by the Western Theatre Command (one of the five commands of China's PLA) as an "attempt to mislead their domestic and international audience."
Earlier, sources told ANI that an incident of firing had taken place on the LAC in the Eastern Ladakh sector where troops of India and China have been engaged in a stand-off for over three months.
India recently outflanked China by taking control of strategic height near Pangong lake's southern bank. It thwarted an attempt by the Chinese army to transgress into Indian areas near the southern bank of Pangong Tso near Chushul in Ladakh.
India and China have been engaged in a standoff since April-May over the transgressions by the Chinese Army in multiple areas including the Finger area, Galwan Valley, Hot springs, and Kongrung Nala.
The situation worsened after 20 Indian soldiers were killed in violent clashes with Chinese troops in Galwan valley in June. (ANI)

6 thoughts on “Indian, Chinese Army continue to communicate even as troops remain in face-off position near Rezang La heights”