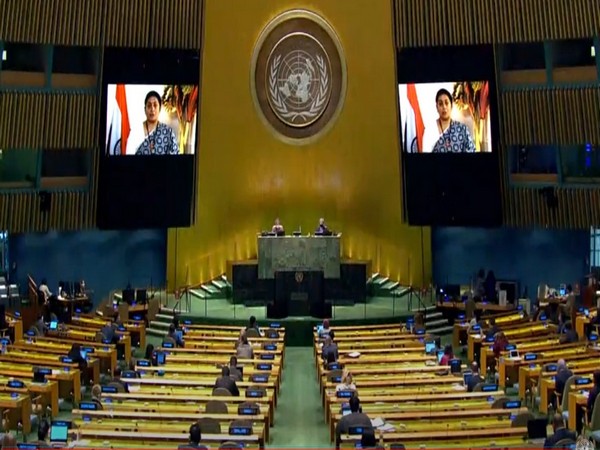 New York/New Delhi [US/India], October 2 (ANI): India recognises the centrality of gender equality and women's empowerment in all aspects of our developmental agenda, Union Minister for Women and Child Development Smriti Irani said at the United Nations.
Speaking on the 25th Anniversary of the Fourth World Conference on Women, she said, "Women numerically constitute half of humanity but their influence transfuses all dimensions of society, polity, and economy. In India, we recognize the centrality of gender equality and women's empowerment in all aspects of our developmental journey," she added.
The Union Minister said that India is now focused on inclusive growth and deep reforms that together are bringing about transformational changes.
"Heralding these changes under the leadership of our visionary Prime Minister Narendra Modi, we have moved from a paradigm of women's development to women-led development," she added.
Talking about the issue of reservation for women, she said, "Reservation of seats for women in local governance in the situation has ensured that more than 1.3 million elected women representatives provide leadership in the formulation and implementing gender-sensitive public policies at the community level."
"More than 200 million women, have been brought into the formal banking system through the Government's Financial Inclusion Initiative. Innovative use of digital technologies has provided equal opportunity for women to access insurance, loans, and social assistance," she said.
On the issue of gender parity, she added, "India today is attaching the highest priority to ensuring gender parity in all spheres of life and elimination on of all forms of gender-based discrimination. Several of our legislations such as those pertaining to sexual harassment of women at the workplace, protection of women from domestic violence, protection of children from sexual offences, and our criminal laws' amendments, have been strong enablers of women empowerment and protection of children especially girls, over the past six years."
The Government of India has taken a series of measures to ensure safety, security and well being of women during the coronavirus pandemic, including 'One Stop Centres' which provide medical, psychological, legal, police and shelter facilities under a common roof, the Union Minister stated.
In the end, Irani concluded her speech by reiterating India's commitment to full and effective implementation of the Beijing Declaration and Platform for Action.
"What we achieved 25 years ago at the Fourth World Conference on Women still remains the guiding light and source of inspiration for our actions nationally and in the international arena. India remains ready to work with all international partners to build a more just and equal post-COVlD world for us and our daughters," she said. (ANI)