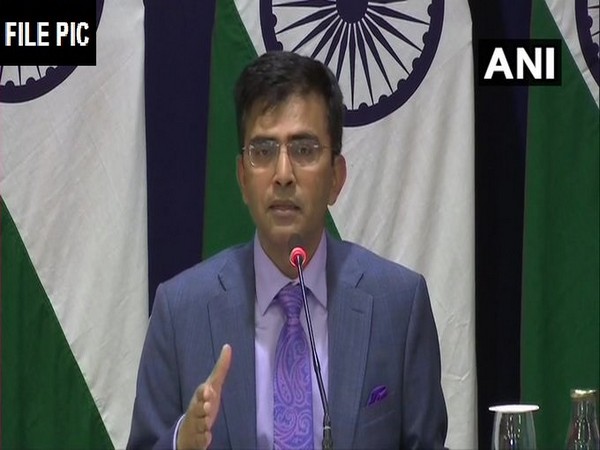 New Delhi [India], Feb 17 (ANI): India on Monday issued a "strong demarche" to Ankara's ambassador here, over the remarks made by Turkish President Recep Tayyip Erdogan on Jammu and Kashmir during his recent visit to Pakistan.
The demarche was made by Secretary (West), MEA to the Ambassador of Turkey in New Delhi.
"India has made a strong demarche with the Turkish Government on the remarks made by President Erdogan on the Indian Union Territory of Jammu & Kashmir during his recent visit to Islamabad. These remarks reflect neither an understanding of history nor the conduct of diplomacy. They distort events of the past to advance a narrow-minded view of the present. India made a strong demarche with the Turkish Government," Ministry of External Affairs (MEA) spokesperson Raveesh Kumar said in a statement.
Stressing that recent episode is one more example of the pattern of Turkey interfering in the internal affairs of other countries, the MEA spokesperson said, "India finds that completely unacceptable. We particularly reject the repeated attempts by Turkey to justify the cross border terrorism practiced so blatantly by Pakistan."
The MEA warned that these developments have strong implications for "our bilateral relationship."
Earlier on Saturday, India had reacted sharply to the references of Jammu and Kashmir in the Turkey-Pakistan joint declaration, calling upon Ankara to not interfere in New Delhi's internal affairs and develop a proper understanding of the facts on the grave threat posed by terrorism emanating from Pakistan.
Responding to queries regarding reference to Jammu and Kashmir by Turkish President Recep Tayyip Erdogan during his visit to Pakistan, as well as in the joint declaration between the two countries, External Affairs Ministry spokesperson Raveesh Kumar had said, "India rejects all references to Jammu and Kashmir, which is an integral and inalienable part of India."
"We call upon the Turkish leadership to not interfere in India's internal affairs and develop a proper understanding of the facts, including the grave threat posed by terrorism emanating from Pakistan to India and the region," he had said.
In a joint declaration issued by Pakistan and Turkey at the end of Erdogan's talks, the two countries had underscored the need for resolution of all outstanding disputes between Islamabad and New Delhi, including Kashmir issue through a sustained dialogue process, and in accordance with the relevant UN Security Council resolutions.
Pakistan has been rattled by the Indian government's move to revoke Article 370 of the Constitution that accorded special status to Jammu and Kashmir. India has maintained that the move is its internal matter -- a stance which has been supported by several countries across the world, including SAARC nations, with the exception of Pakistan. (ANI)