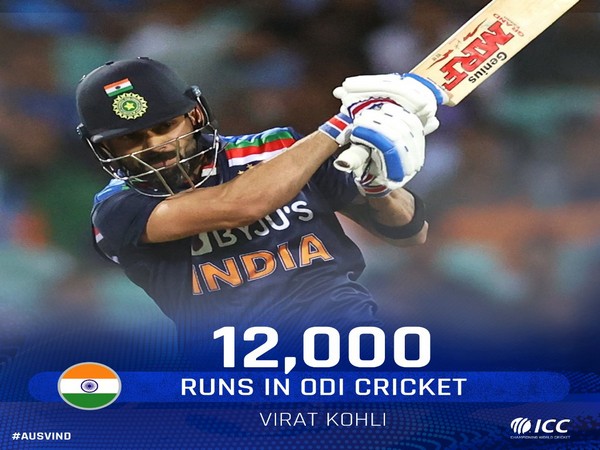 Canberra [Australia], December 2 (ANI): India skipper Virat Kohli on Wednesday became the fastest batsman to score 12,000 ODI runs.
Kohli achieved the feat during the ongoing third ODI against Australia, being played at the Manuka Oval. He took only 242 innings to touch the landmark figure. Also, the captain is just the sixth player to do it.
"12,000 ODI runs for Virat Kohli. He has become the fastest batsman to reach the milestone, in just 242 innings," International Cricket Council (ICC) tweeted.
India won the toss and opted to bat first in the third and final ODI against Australia. Australia have already sealed the three-match ODI series against India as the hosts enjoy an unassailable 2-0 lead.
The Aaron Finch-led team registered a 66-run win in the first ODI and a 51-run win in the second. Steve Smith smashed a century in both matches, playing a knock of 105 and 104 in the first and second ODI respectively.
Although India have already lost the three-match series, the Kohli-led side still has much to play for in the final ODI of the series. Apart from avoiding the humiliating ODI series whitewash, India can earn points in the ICC Men's Cricket World Cup Super League.
The ongoing series between India and Australia is a part of the ICC Men's Cricket World Cup Super League and defeats in the opening two ODIs means India is yet to open their account. Whereas, Australia have so far played five matches in the Super League, registering four wins and one defeat. With 40 points under their belt, Australia top the ICC Men's Cricket World Cup Super League standings followed by England, who have 30 points from six games.
India are currently playing at 87/2 after the completion of 17 overs with Kohli and Shreyas Iyer in the middle. (ANI)