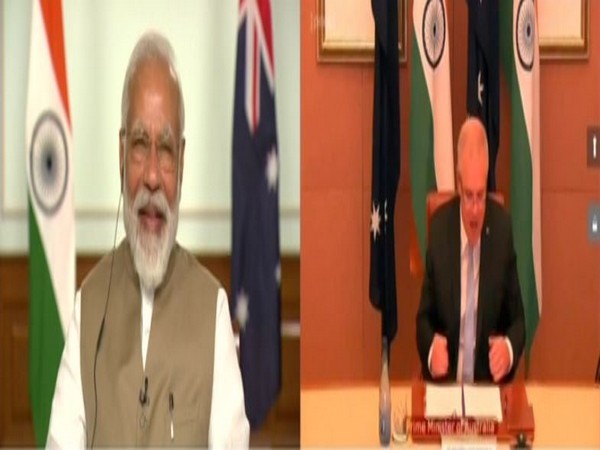 Canberra [Australia], June 4 (ANI): Australian Prime Minister Scott Morrison is looking forward to trying his hands at famous Gujarati Khichdi after making samosas last week, reflecting his newly-found love for Indian cuisines.
"I wish I was there for the famous 'Modi hug' and the samosas. We had a bit of fun at the weekend after making the samosas. Next time, it will have to be the Gujarati Khichdi which I know is a favourite of yours and you have mentioned to me before. So I'll try that in the kitchen next time before we meet in person," Morrison said, while sharing some light-hearted moments with PM Modi during their virtual meet on Thursday.
The video conference marked the beginning of the first virtual summit between India and Australia.
The Australian Prime Minister had last week tried making an Asian snack- Samosa - at his home and shared its pictures on his official Twitter handle, calling them "ScoMosas".
The tweet posted by Scott Morrison on Sunday read: "Sunday ScoMosas with mango chutney, all made from scratch - including the chutney! A pity my meeting with @narendramodi this week is by videolink. They're vegetarian, I would have liked to share them with him."
PM Modi was quick to respond. "Connected by the Indian Ocean, united by the Indian Samosa!" he tweeted.
Replying to Morrison this morning, PM Modi, who has been often photographed hugging world leaders, said, "Gujratis will be very happy to hear that. Khichdi is eaten across the country, people may give the staple food different names in different parts."
The two world leaders today "had an outstanding discussion, covering the entire expanse of (our) relationship," PM Modi said this afternoon. "India-Australia ties have always been close. As vibrant democracies, from Commonwealth to Cricket to even Cuisine, our people-to-people relations are strong and the future is bright!(sic)," he tweeted.
The two prime ministers have already met on four occasions during the last one-and-half years. But Morrison's visit to India was cancelled twice this year; first in January due to the Australian bushfires and the second, now owing to the coronavirus-enforced lockdown.
Displaying the bonhomie once again, PM Modi once again extended invitation to his Australian counterpart to visit India soon.
During the virtual talks, they had touched upon pressing issues, including G20, Indo-Pacific and to undertake a comprehensive approach to tackle difficult problems globally particularly in the health area owing to the pandemic. (ANI)