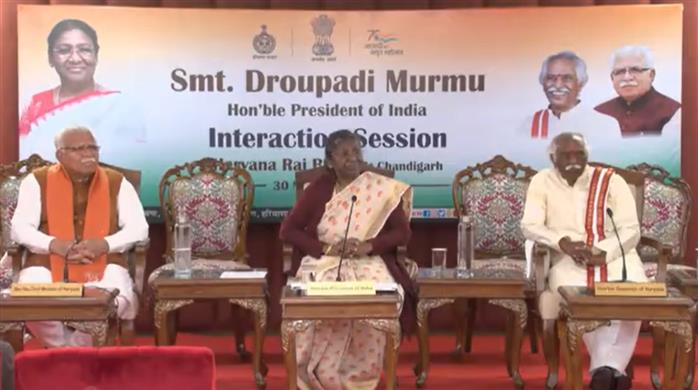 President Droupadi Murmu on Wednesday stressed empowering daughters as she interacted with ASHA workers and women sportspersons of Haryana and learnt about their experiences.

Murmu made these remarks during her two-day visit to Haryana.

She said that women should be made more and more strong, asserting that they face many challenges and obstacles in their lives.

“They should not be left alone,” Murmu said.

She said daughters should be empowered for society and the country.

During the programme, an ASHA (Accredited Social Health Activist) worker from Ambala, who is also associated with the ‘Beti Bachao-Beti Padhao’ campaign, shared her experiences about a drive against illegal sex determination tests.

She said she took part in 19 raids conducted by the state health department against the illegal sex determination tests.

She also shared how she prevented her neighbour from carrying out an abortion after she had undergone the sex determination test. The Asha worker said the girl is now seven-year-old and she is being well taken care of by the family.

The Auxiliary Nurse Midwife (ANM) worker posted in Jhajjar district said she had worked in decoy operations against sex determination tests and had helped in the arrest of 10 people and a nurse.

Anganwadi worker Karamjit Kaur said that after the ‘Beti Bachao-Beti Padhao’ campaign was launched in 2015, several awareness campaigns and rallies were undertaken.

She said in Yamunanagar district, the sex ratio had improved from 818 to 938.

The President also interacted with women sportspersons who have brought laurels to the state and the country.

A woman mountaineer, who is now serving as a police inspector in Haryana, shared her life experiences and said she drove a tractor and did farming.

Pooja Sihag, the bronze medallist in the women’s freestyle 76kg category in the 2022 Commonwealth Games, said it was her father’s dream that she become a sportsperson.

She said that after her father’s death, her mother motivated her to move forward.