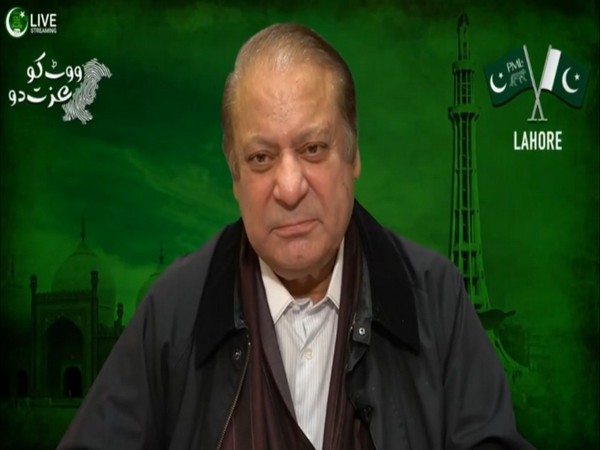 Islamabad [Pakistan], January 17 (ANI): Hitting out at Prime Minister Imran Khan for shifting the blame on the agents managing two US companies registered on his orders in the PTI foreign funding case, PML-N supremo Nawaz Sharif called the former "a criminal" and questioned why the Election Commission was not taking any action into the matter.
"Why is the Election Commission of Pakistan (ECP) not taking action when the evidence is clear-cut?" former Pakistan Prime Minister Sharif asked in a video message while mentioning that the country "is protesting against the ECP's negligence in fulfilling its Constitutional duties".
"Imran Khan, the man wearing the medal and shouting the slogan of Sadiq and Ameen, who did not tire when saying that accountability should begin with him [...] has now become the biggest obstacle for justice," he added.
Highlighting that several tactics are being used by Imran Khan to delay the probe, the Pakistan Muslim League (N) chief said, "In March 2018, the ECP had formed a scrutiny committee and directed that a report be submitted in one month. Approximately two-and-a-half years later, there is still no report."
"Finally in his seventh year, Imran Khan has accepted that things have gone awry when it comes to foreign funding. But he has put the responsibility of this on his agents and said that they must have done this," he noted.
On the report submitted to the commission, Sharif said that the State Bank of Pakistan had given the ECP information about 23 accounts, 15 of which the Premier hid and did not include in the report given to the commission.
"He did not disclose the total amount, the source, and did not give a money trail or receipts," he said.
"If there is no corruption, then why was it hidden? Do these suspect accounts not come under the crime of money laundering? Where is the money trail? And why is the information not being given to the ECP and to the people?" he questioned.
He further said the Pakistan Democratic Movement (PDM), an alliance of 11 opposition parties, will protest in front of the ECP office in the capital on January 19, urging people to join the opposition's march and to save the country from "injustice", Dawn reported.
The foreign funding case against Imran Khan's Pakistan Tehreek-e-Insaf (PTI) in November 2014 was registered by Akbar S Babar, one of the founding members of the party, alleging major financial irregularities in the party's accounts.
The allegations made by Babar included illegal sources of funding, concealment of bank accounts in the country and abroad, money laundering, and using private bank accounts of PTI employees as a front to receive illegal donations from the Middle East, Dawn reported. (ANI)