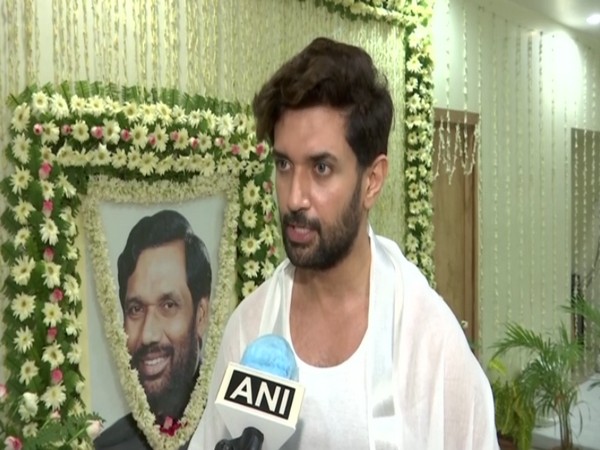 Patna (Bihar) [India], October 16 (ANI): Lok Janshakti Party (LJP) chief Chirag Paswan on Friday said that he is "Hanuman" of Prime Minister Narendra Modi and that his relationship with the senior BJP leader will not be affected by statements of the other leaders of the ruling party at the Centre and in Bihar.
Paswan, whose party is contesting polls outside the NDA in Bihar, also said that the next government in Bihar will be formed with BJP leader as Chief Minister and LJP will be part of it.
Paswan made a veiled reference to remarks of BJP leader Sushil Kumar Modi who had said that the BJP may write to the Election Commission to prevent any other party except partners of NDA from using Prime Minister Narendra Modi's photograph in their posters in Bihar elections.
"I actually do not need to use PM Modi's photos for campaigning. He lives in my heart, I am his Hanuman. If needed, I will tear open my chest and show it. My relationship with PM Modi would not be affected by any statements of BJP leaders. Even if they include my criticism in PM Modi's speeches in the upcoming rallies in the state then also I will not mind that. But I reaffirm that on November 10, I will make a BJP leader as the Chief Minister of Bihar and LJP would be part of the government. I will never put candidates against any BJP candidate in the assembly elections," Paswan told ANI.
"I have full faith on the Prime Minister and I have confidence that after November 10, BJP and LJP will form a government together in Bihar," he added.
Information and Broadcasting Minister Prakash Javadekar told the media on Thursday that Paswan was trying to mislead people by taking names of senior BJP leaders.
"Chirag Paswan has decided his own path in Bihar and is contesting elections separately. He is trying to mislead people by taking names of BJP senior leaders. We don't have any A, B, C or D team in Bihar. We only have one strong team of BJP, JDU, Hindustani Awam Morcha and Vikasheel Insan Party in the alliance," he said.
Javadekar also said that the LJP will only be reduced to the role of "votekatwa (vote cutter)" party and asserted that NDA will get a three-fourth majority.
Paswan also attacked Bihar Chief Minister Nitish Kumar and referred to party's stance on triple talaq legislation and earlier stance of its leaders on abrogation of Article 370.
"Nitish Kumar was worried that LJP might use PM Modi's photo. Where am I using PM Modi's photo in our party's posters and manifesto? Actually, Nitish Kumar needs PM Modi's photo. In 2013, when Narendra Modi was the PM candidate then Nitish had abandoned the NDA," Paswan said.
He said BJP leaders should refrain from making comments on LJP as being a 'votekatwa' party and claimed that these comments are being made at the behest of Nitish Kumar.
"I do not understand why Lok Janshakti Party (LJP) cannot expand its public base. Using terms like 'votekatwa' for our party is beyond my understanding. At the same time, I can see where this language is coming from. The top BJP leadership is speaking Bihar Chief Minister Nitish Kumar's language. BJP is performing its coalition dharma but they should think before speaking as they are talking about Ram Vilas Paswan's party to whom they paid condolences a few days back," he said.
Paswan further said that his goal is not to "rule" Bihar but to work for the pride and development of the state.
"There is an attempt to spread a rumour that if Ram Vilas Paswan was alive then LJP would have been part of the coalition. I would like to clarify that if I had a vision of ruling in Bihar then there would have been a red carpet for me on the lines of our victory in Lok Sabha. However, my politics is not of ruling Bihar but for 'Bihari Asmita' (securing pride of the state)," he said.
"I have chosen the path of struggle under the guidance of my father Ram Vilas Paswan. He had told me recently that if the present chief minister of Bihar retains his post in the upcoming elections, he would never be able to forgive me as this would take back Bihar by another 5-10 years," he said.
He accused Nitish Kumar of practicing caste-based politics.
"Nitish Kumar has only done caste-based politics by dividing the society on the basis of his so-called 'social engineering'. He has not done anything to industrialise the state and for education and health facilities in the state. Nitish Kumar does not trust the BJP leadership. He is not called 'Kursi Kumar' without any reason. After 2010, he never paid any attention to development matters," he alleged.
He claimed that Nitish Kumar will not become the Chief Minister of Bihar again.
Bihar will go to polls in three phases - October 28, November 3 and November 7 for its 243 assembly seats. The results will be declared on November 10. (ANI)