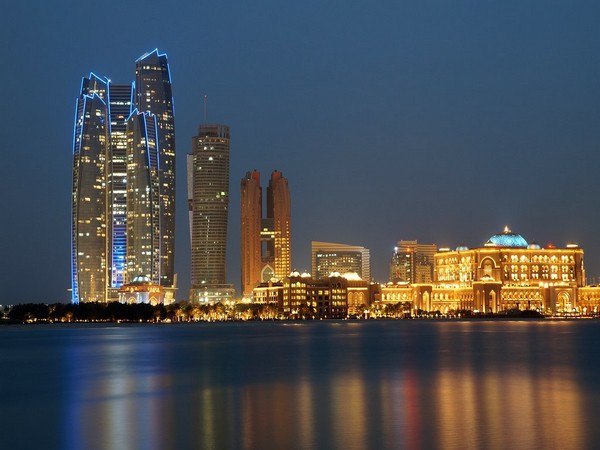 Abu Dhabi [UAE], Nov 17 (ANI): The middle-east is no doubt an exotic venue for a fun-filled and adventurous vacation. Stretching from the Arabian Gulf coast to the heritage heartland of Al Ain and the magnificent desert landscape of the Al Dhafra region, Abu Dhabi is one such scenic beauty comprising 80 per cent of the UAE!
Between its natural islands and luxury resorts, shifting sand dunes and cool oasis, the emirate holds something for every traveller. So, if you see yourself jetting off to the Arabian peninsula, the following is a list of activities and attractions to immerse yourself in when in Abu Dhabi:
Louvre Abu Dhabi
One of the most anticipated museums of the 21st century; Louvre Abu Dhabi is the first museum of its kind in the Arab world. Opened on Saadiyat Island in late 2017, it was designed by famed French architect Jean Nouvel and laid out as a 'museum city' beneath a vast, silvery dome some 180metres in diameter.
The dome is comprised of nearly 8,000 geometric metal stars that overlap to create an ever-moving 'rain of light' illuminating the spaces below.
Sheikh Zayed Grand Mosque
Sheikh Zayed Grand Mosque is an architectural work of art and an instantly recognisable icon of Abu Dhabi. With a capacity for a remarkable 40,000 worshippers, the mosque is an edifice of both an epic scale and delightful detail evident in semi-precious stone inlays set in dazzling-white marble, and patterns in the world's largest hand-knotted carpet.
The Mosque welcomes visitors daily with a strict dress code applicable to all: Long, loose-fitting, ankle-length clothing. Women are required to wear a headscarf. Traditional abayas and kanduras are provided for women and men respectively if required. 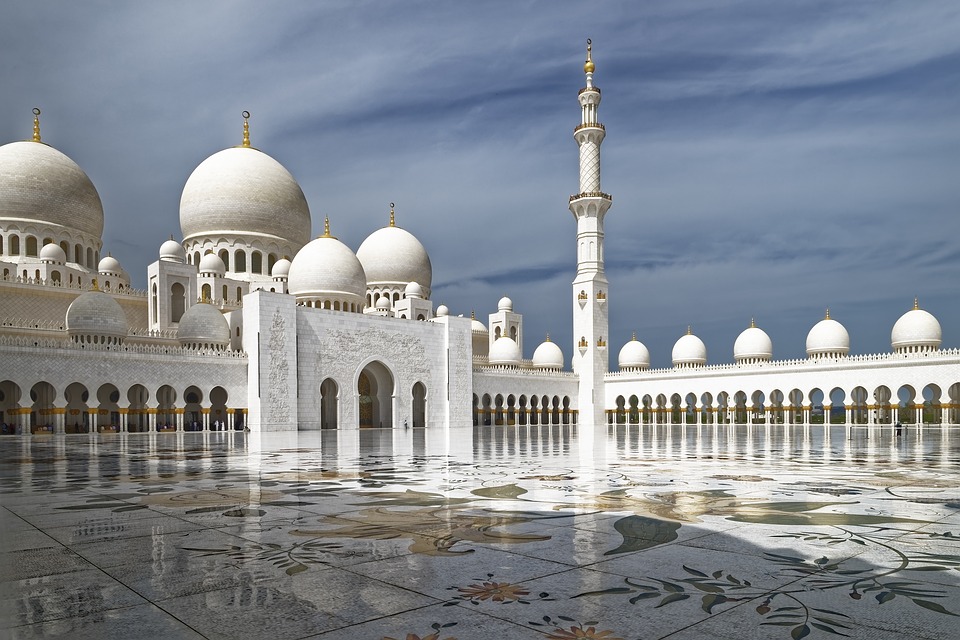 The Mosque is closed for tourism activities on Friday mornings (but open for worship), reopening after 4:30 pm for visitors. The Mosque closes at 10 pm daily, with the latest entry permitted until 9.30 pm.
Family fun on Yas Island
Yas Island is a world-class entertainment destination 30 minutes from downtown Abu Dhabi and just 10 minutes from the Airport.
Hit Warner Bros. World-- an indoor theme park that's home to 29 state-of-the-art thrill rides, family-friendly attractions and entertainment in six immersive lands.
Nearby you'll also find Ferrari World Abu Dhabi with its legendary Formula Rossa - the world's fastest roller-coaster;
Yas Waterworld--home to 43 rides, slides and attractions; Yas Mall--the UAE's second-largest shopping centre; Yas Marina Circuit--host to the annual F1Etihad Airways Abu Dhabi Grand Prix; Yas Beach and Yas Links Abu Dhabi.
Indulge your 24 karat palate
Emirates Palace is one of the most luxurious hotels ever built. It exudes extravagance at every level, from its design - the main hotel building stretches over a kilometre from wing to wing; to the 24 karat gold flakes sprinkled on everything from cappuccinos to the hotel's signature 24 karat gold 'Emirates Palace Camel Burger'.
That's a camel mince patty infused with local spices and a dash of truffle mayonnaise on a gold-dusted bun. Make a reservation at the hotel's Le Cafe for a totally guilty culinary pleasure.
Abu Dhabi falcon hospital
The remarkable Abu Dhabi Falcon Hospital is an open door into the noble tradition of falconry. Guided tours of this award-winning specialist hospital take visitors through waiting rooms and wards where the birds undergo general check-ups, are X-rayed, or simply pick up some new flight feathers.
Visitors can hold a falcon and visit the hospital's free-flight facility to see them rip through the air. This is a jaw-dropping experience you will never forget. 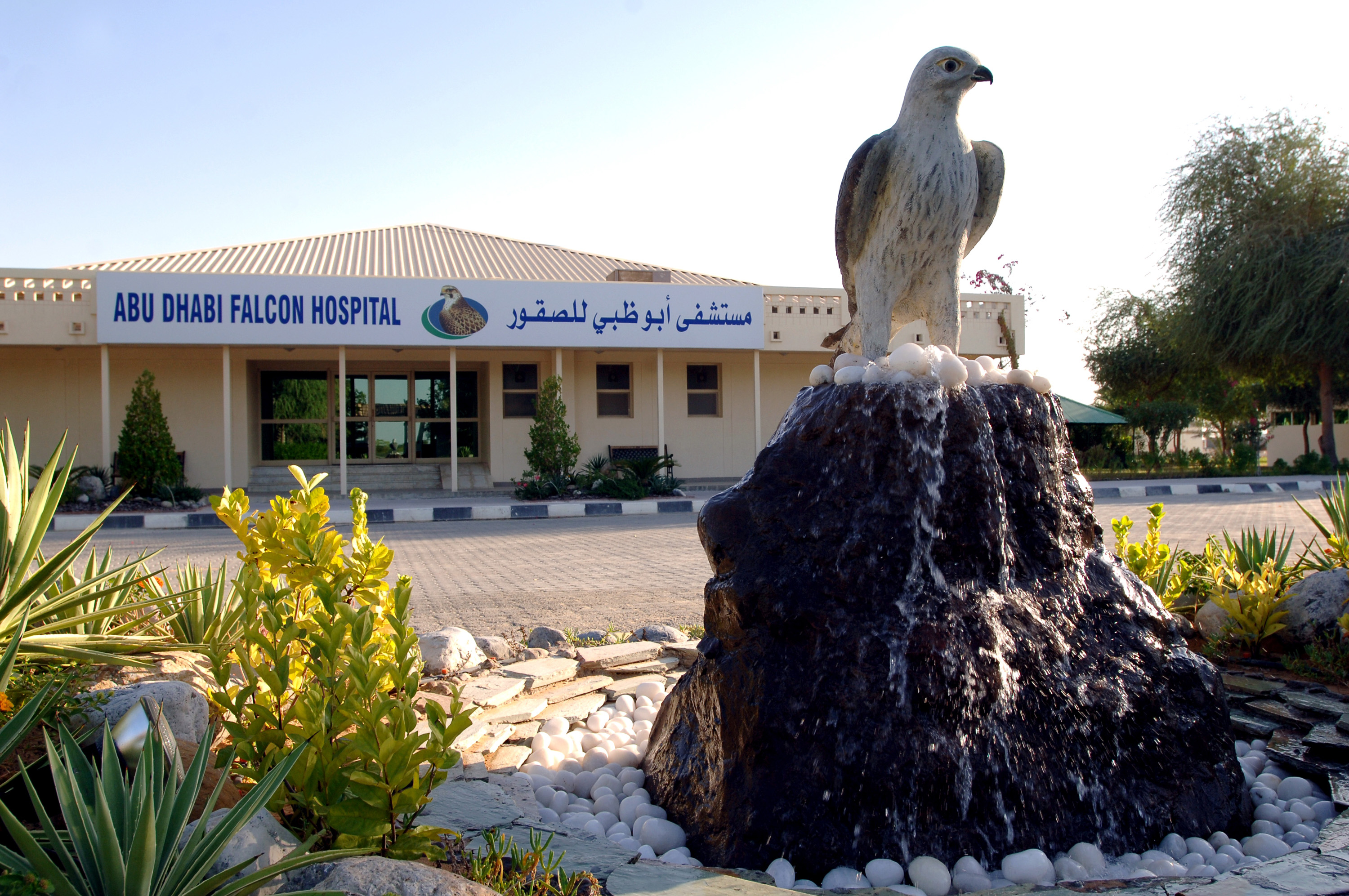 Venture out into the desert
Abu Dhabi's desert regions are mesmerising. Vast expanses of golden, sandy crescents that curl and roll forever. Scramble up the dune and watch the floury sand roll away like liquid. There's a tranquillity in the vastness here that's hard to describe, especially with a few welcome creature-comforts beneath the starry skies of the Milky Way. 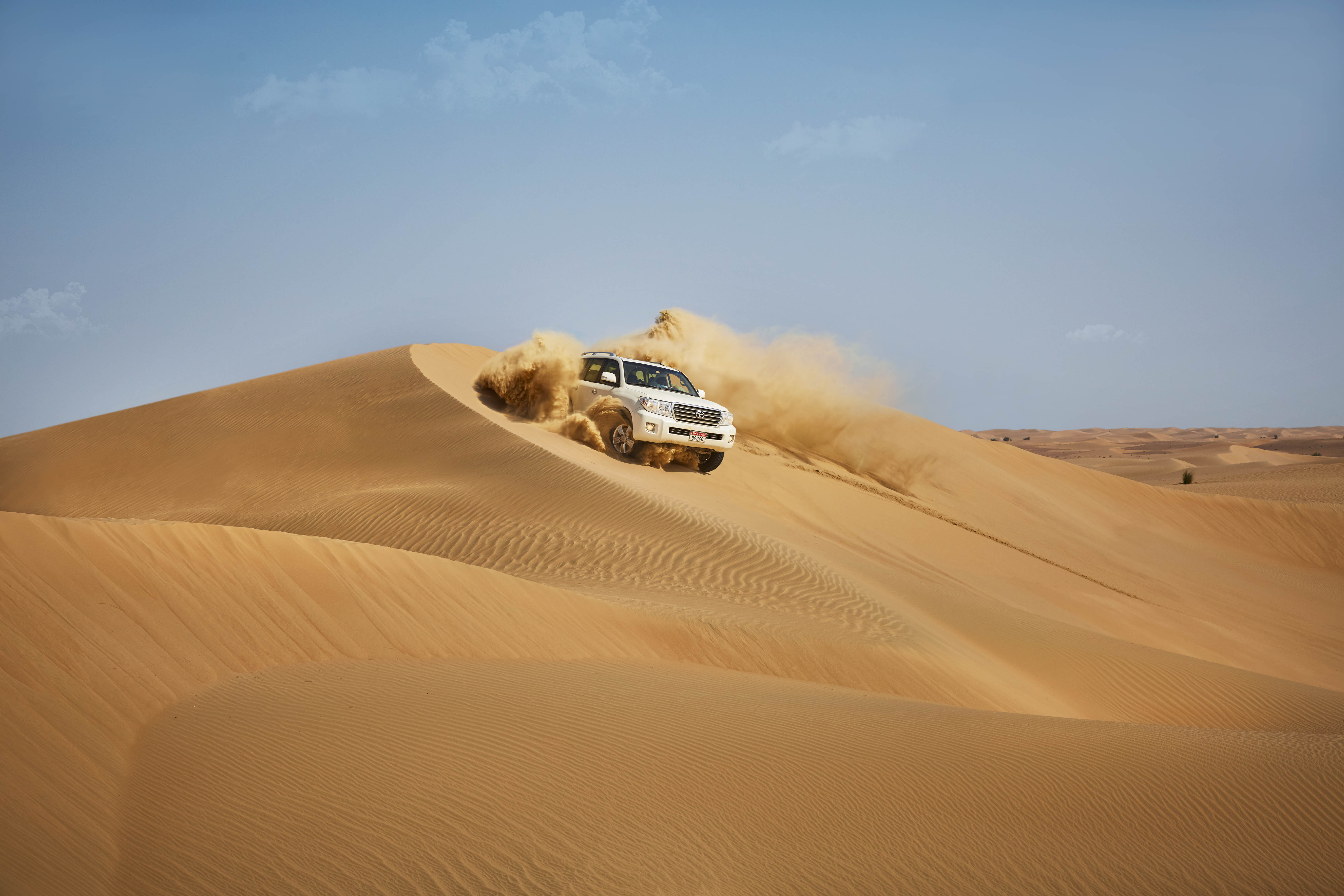 There are numerous ways to venture out into this otherworldly wilderness. Join an afternoon desert adventure and ride the dunes with an expert driver in the comfort of a 4-wheel drive before settling in for a hearty barbecue dinner and cultural performances under the stars.
Try an overnight desert safari or head into the Rub Al Khali region and check-in to a luxury desert resort for a true bucket-list experience.
Set sail
Abu Dhabi is blessed with 700 kilometres of coastline and 200 natural islands in the sparkling waters of the Arabian Gulf. For millennia, these waters have carried trade and been a source of essential sustenance. And long before the discovery of oil, Abu Dhabi's shallow pearl beds were a local source of wealth and prestige.
These days, Abu Dhabi's waterways are predominantly a source of recreation for locals and visitors alike with tourism operators offering numerous ways to set sail.
Join a dinner cruise aboard traditional dhow and take in captivating views of the city's illuminated night skyline; take a white-knuckle speed boat ride pasta host of attractions; explore Abu Dhabi's life-giving mangroves in a kayak; or even join a traditional pearling dhow for a 90-minute journey through the calm waters of the Hudayriat islands, and learn the stories of the Arabian Gulf's ancient pearling industry.
To Al Ain
Just 90-minutes drive from Abu Dhabi city, at the base of Jebel Hafeet - the emirate's highest peak - sits the charming garden city of Al Ain (meaning 'The Spring'). Known for its palm groves and natural springs, Al Ain is home to historic forts and museums, a renowned camel market, Al Ain Zoo, Wadi Adventure - the region's only man-made white water rafting, kayaking and surf facility, and more. 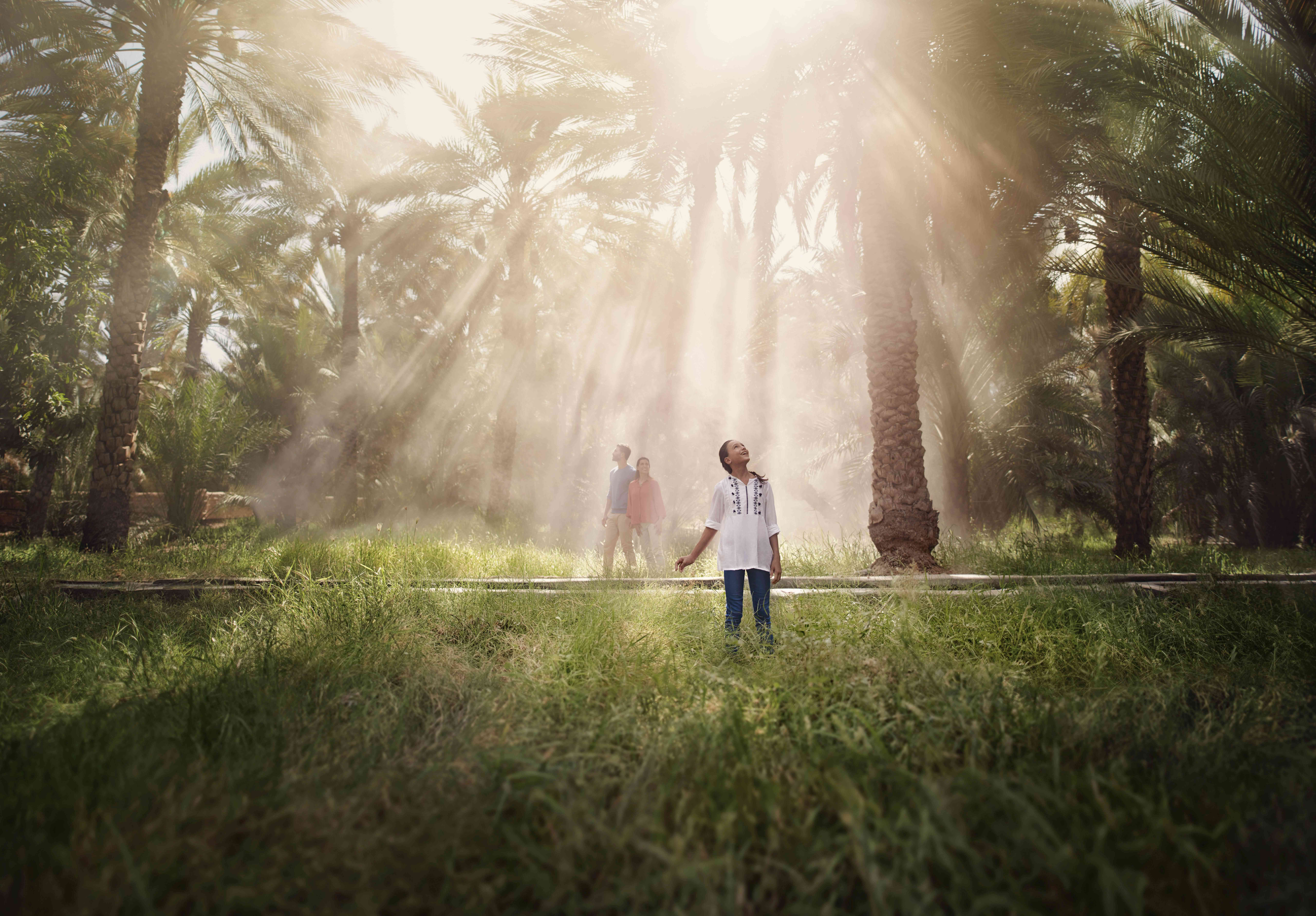 Once a vital green oasis on the caravan trade route from the UAE to Oman, Al Ain is Abu Dhabi's heritage heartland and a UNESCO World Heritage Site.
Take a taxi or drive up the spectacular Jebel Hafeet for stunning views of Al Ain and beyond from more than 1,200 metres altitude. Then enjoy one of the world's great drives ride back down the mountain's 21 dramatic hairpin turns and sweeping bends.
Excite your tastebuds
A country's cuisine is a reflection of its place in the world, the influences that shaped it through history, its climate and culture. Emirati food is no different, and you'll find it infused with spices and ingredients from India, Asia and the Middle East.
Whether you're a five-star-fine-diner or a local-hole in-the-wall aficionado, you'll find a diverse and delicious food scene in Abu Dhabi brimming with the aromas of cinnamon, saffron and turmeric, along with nuts, limes and dried fruit in many local dishes.
Fish and meat are mainstays of much Emirati cooking, and classic local specialities include Madrooba: A mix of salted fish, spices and thick sauce on rice, often served with saffron, nuts and spices.
Harees: A dish of meat and wheat slow-cooked in a clay oven or pot and served with ghee. Majboos: Meat boiled in water to which a distinctive blend of spices and dried limes are added. Look for them on menus at local diners and hotel restaurants alike, and enjoy a real taste of Abu Dhabi. (ANI)