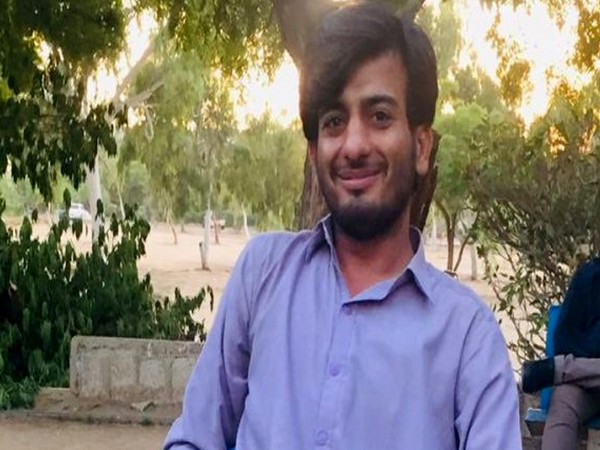 By Hakeem Baloch
London [UK], Aug 27 (ANI): On August 13, when the rest of Pakistan was busy buying Pakistani flags and getting ready to celebrate August 14 as their 73rd year of independence, Balochistan was mourning, Balochistan was crying, Balochistan was sad, Balochistan was screaming, Balochistan was trying to figure out why this brutality and inhuman actions are worsening with every passing day.
On August 13, what we saw and heard was a tragic incident in which a Baloch youth Hayat Mirza lost his life. Murder of Hayat Mirza was not only the murder of his soul but this murder killed many dreams, dreams of education, dreams of having a respectable job and taking care of his parents. All those dreams and Hayat's life changed with 8 bullets that went deep in his chest. Those shots were fired by personnel of the Frontier Corps (FC).
A paramilitary force that operates in civilian populations of Balochistan and KPK instead of performing their duties on borders. Hayat was brutally beaten and killed inhumanly, his body was thrown and FC personnel went to their camps before anyone was arrested. Since this case had eyewitnesses and the local media already reported the case and the news went viral on social media that is why this was the only time when Pakistani forces accepted their single crime in Balochistan. One of the FC personnel Shahidi Ullah was arrested by police and he has been identified by the father of Hayat Mirza.
Hayat Mirza's family is poor and they have done their best to ensure that Hayat gets a good education. Unfortunately, their dreams and hopes were broken down into pieces with those eight bullets fired by a so-called defender (FC) personnel. To justify this inhuman murder IGFC visited the house of Hayat Mirza met his father offered him seven hundred thousands rupees, but the old man who lost his son in a broad daylight in front of his eyes refused to take the money.
A statement issued by the FC after the visit of IGFC at Hayat's parent house, says that "Hayat's Incident is tragic but that was an individual act and not the whole organisation is involved in this action".
Even the ministers of Balochistan's government have been given a task by the FC, to support their narrative and claim that this was an individual action and not a collective policy of Baloch Genocide. Ministers like Zahoor Buledai, Jam Kamal Khan CM of Balochistan and Zubaida Jalal have already begun to counter the public protest and divert their attention from this brutal murder.
In a leaked WhatsApp conversation of Zubaida Jalal, she is telling the local people of here constituency not to organise a candle vigil for Hayat Mirza, calling candle vigil an act of Christian people. Similarly, Zahoor Buledai openly came in favour of the FC against the innocent people of Balochistan. In one of his tweets responding to the renowned Baloch female activist Dr Mahrang Baloch, Mr Buledai says that "It is an individual act, it should not be labelled an institution or state. The culprit has been taken to the task and justice is being delivered."
In the same manner Chief Minister of Balochistan Jam Kamal Khan Aalyani while trying to justify the killing of Hayat Baloch and others killed by the state forces, tweeted " Do we forget or don't remember the governance model of 2008 to 2013!
Why are so-called nationalists, human rights activists and some electronic media keep quiet when a teacher, levies/police sepoy, doctor, common person, traveller and rest die in an IED, ambush or target."
Such reactions and claims from a so-called ruling party only show that they have been given one and the only task to justify any and every action of Military and paramilitary forces in Balochistan. Whether it is the killing of Hayat Baloch, the incident of Bramsh Baloch and her Mother Malik Naz or the abductions and killings of Baloch people on a daily basis. These ministers and so-called Balochistan government have been deliberately ignoring all such violations of Human rights and calling it the development of Balochistan until the cases of Bramsh and Hayat's surfaced and they received media coverage.
In contrast to all their baseless claims and fake development slogans, the people's resistance has exposed the state brutalities. From Quetta to Gwadar, From Karachi to Europe Baloch masses have shown their anger against the killing of Hayat Baloch and this has forced the Pakistani state machinery to arrest one of their own personnel.
According to the Dr Naseem Baloch organiser of Baloch National Movement in Diaspora, "Pakistani state forces are trying their level best to shut this case as soon as possible, that is why one of the personnel was given to the police for trial. He further added that "We all know that nothing will happen to this personnel just for the face-saving they may announce a punishment for him but after some time he will be shifted to his hometown and from there without anyone knowing he will be out of the jail."
To end this brutality and oppression the Baloch need to resist these oppressive policies of the Pakistani state in every possible way. If they wish to live freely and safely in their own motherland Balochistan.
(Hakeem Baloch is President of Baloch National Movement UK Zone. He is a student of media production). (ANI)