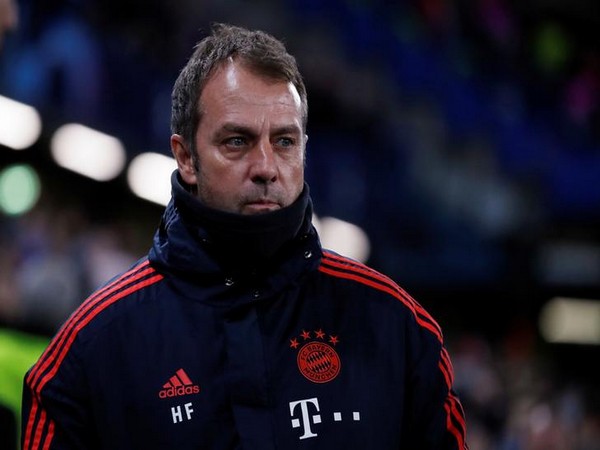 Munich [Germany], April 4 (ANI): Hansi Flick has signed a three-year contract as head coach of football club Bayern Munich on Friday.
Flick initially took over from Niko Kovac as interim manager in November, before Bayern announced the following month that the 55-year-old would stay on through the remainder of the 2019-20 season.
After a successful run since then, Bayern have now confirmed that Flick has agreed a deal to stay on through to June 2023.
Bayern's chairman Karl-Heinz Rummenigge said the club is happy with the way he leads the side and result have reflected that.
"FC Bayern are very satisfied with Hansi Flick's work. The team has developed very well under him. They're playing attractive football, which is also reflected in the results. We're the only German club still present in all three competitions. In addition, I like the way he leads the team," Rummenigge said.
"His qualities as a person are convincing, he has empathy on his side. FC Bayern trust Hansi Flick, and we're convinced we'll continue to achieve our goals with him in the future," he added.
Flick was a Bayern player from 1985 to 1990. He won four German championship titles (1986, 1987, 1989, 1990), the DFB Cup (1986) and the Supercup (1987) with Bayern. He was also a 1987 European Champions' Cup finalist. After his pro career he took his coaching licence from the German Sport University Cologne, graduating as valedictorian in 2003. He started his coaching career at FC Victoria Bammental in the fourth division.
"I'm looking forward to taking on the upcoming tasks along with my staff and the team. The talks with Karl-Heinz Rummenigge, Oliver Kahn and Hasan Salihamidzic were very good and in a spirit of good faith. We've determined the direction for the upcoming years. I'm sure we can achieve a lot together," Flick said. (ANI)