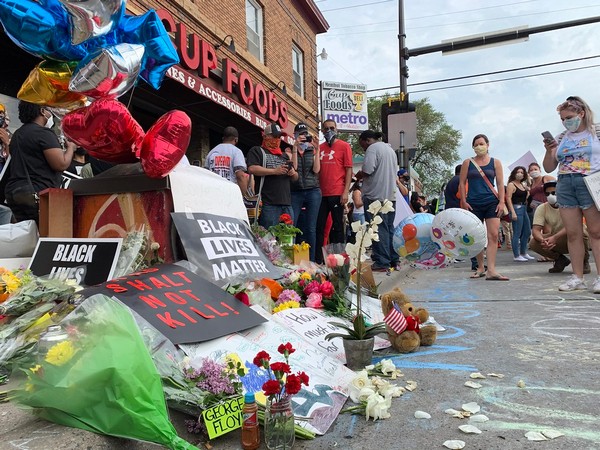 Washington D.C. [USA], June 1 (ANI): Health officials have expressed distress that the ongoing protests against police brutality toward African-Americans and Latino populations, spurred by the death of George Floyd in Minneapolis, could result in another jump in coronavirus cases in the coming weeks and add to the already disproportionate burden of the disease on minority groups across the country.
"It's a triple whammy of protests, plus raging pandemic, plus economic instability. Those three things together make for a perfect storm of viral transmission," Peter Chin-Hong, an infectious disease specialist at the University of California, San Francisco, was quoted as saying by The Wall Street Journal.
He said that he expects there will be a spike in cases due to protests. Mirror patterns would be seen around the world after governments started lifting lockdown restrictions, but this time on a larger scale, he stressed, because the protests are happening across the country, often in hot spots of transmission, like the South and West.
Officials in cities hit by protests stressed that the country was still in the midst of a health emergency and encouraged the public to continue wearing masks and to adhere to social-distancing guidelines.
On average, without social-distancing measures, each infected person transmits the virus to two to four other people, according to several studies cited by the Journal.
The risk for coronavirus transmission is greatest indoors--in enclosed, poorly ventilated and crowded settings, according to researchers. In homes, the so-called attack rate, a measure of the percentage of people who get infected in a specific place or time, ranges from 4.6 per cent and 19.3 per cent.
But in this case, the protests are happening out of doors, where the risk for transmission diminishes. Airflow helps dilute viral particles, reducing the risk an infectious particle will come in contact with an uninfected person, the media reported further.
Yet the protests increase the risks, infectious-disease, experts said, because protesters can come into proximity--often for long periods--and shout.
Outside, "there's a lot of dilution, as long as you're not standing right next to a person" who is infected, said Lisa Brosseau, a respiratory-protection expert and consultant for the University of Minnesota's Center for Infectious Disease Research and Policy.
The transmission by people without symptoms or before symptoms start is partly responsible for the challenges containing the spread of the virus.
Protests also involve a lot of shouting, which further adds to the virus transmission risk, according to infectious-disease experts. Screaming can propel virus-laden respiratory droplets, even more, they said. At the time, people may also be less vigilant about personal hygiene, mask-wearing and social distancing.
The protests are "like having a stadium game every day and everyone's going to it," said Chin-Hong.
"Because of anger and frustration and sadness, people are willing to minimize the biological risk," he added.
The protests could spread the virus in communities already hard-hit, infectious-disease experts said.
More than half of COVID-19-related deaths in Los Angeles County, where protests raged over the weekend, prompting curfews, have been among blacks and Latinos, according to data from the Los Angeles County Department of Public Health.
Statewide, Latinos make up 39 per cent of the state's population, but 54.5 per cent of cases and blacks account for 6 per cent of the population, but for 10 per cent of its deaths, according to data from the California Department of Public Health. According to media reports, New York City also paints a similar picture.
"The virus is still out there. There's still the potential for exposure," William Scott, San Francisco chief of police said during a press conference Sunday. (ANI)