Skip to content
Home  »  National   »   For Nitish Kumar’s satisfaction, PM Modi is free to say anything against me: Chirag Paswan 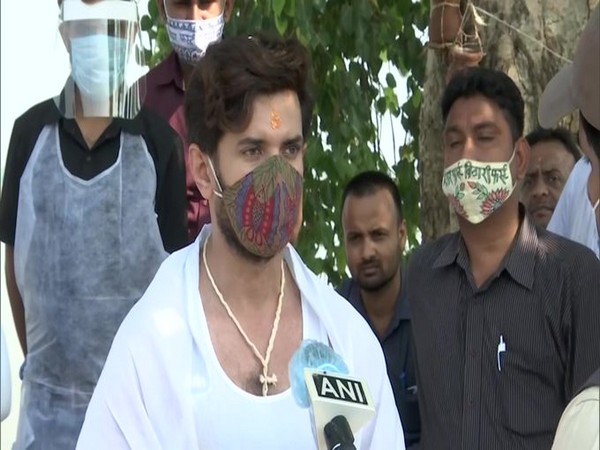 Patna (Bihar) [India], October 18 (ANI): Lok Janshakti Party (LJP) leader Chirag Paswan on Sunday said that for the satisfaction of Bihar Chief Minister Nitish Kumar, Prime Minister Narendra Modi is free to say anything against him.
"I don't want that due to me, Prime Minister Narendra Modi falls in a situation of a 'Dharmsankat'. He should go ahead and fulfill his duty towards the alliance. For Chief Minister Nitish Kumar's satisfaction, the Prime Minister is free to say anything against me," Paswan told ANI.
Criticising the Bihar Chief Minister, Chirag said, "I believe Bihar CM's stopped envisioning policies and become saturated. He is anti-youth and dismisses young leaders, calling them inexperienced but himself started as a young activist during the JP movement. We are aware too and can think for Bihar. The state has given him 15 years already."
Continuing his attack on Kumar, he alleged that the Chief Minister was anxious to portray a wedge between the LJP and BJP. "I'd like to allay this fear by saying that I welcome criticism from BJP leaders, even from the Prime Minister," he added.
"Why should I not respect Modi ji? Only he called me for support when my father was admitted to the ICU," the LJP leader added.
In the forthcoming Assembly polls, the (LJP) will not contest seats where BJP will be contesting, however, it will fight against Janata Dal (United).
Bihar with 243 Assembly seats will go to polls in three phases: October 28, November 3 and November 7. The results are scheduled to be declared on November 10. (ANI)

One person dead, 2 injured after crane collides with metro pillar in Mumbai

Sardar Patel sacrificed the post of the first Prime Minister for a weaker mind like Nehru: Kangana