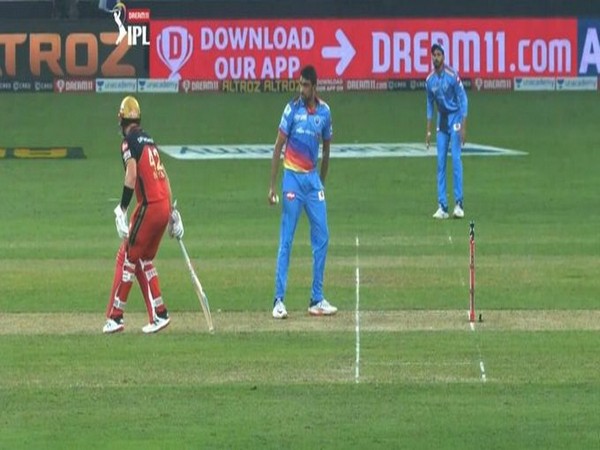 Dubai [UAE], October 6 (ANI): Delhi Capitals' spinner Ravichandran Ashwin on Tuesday said that he has issued first and final warning to all the batsmen and now he should not be blamed if he ends up 'Mankading' in the ongoing Indian Premier League (IPL).
His remark came as Delhi Capitals defeated Royal Challengers Bangalore (RCB) by 59 runs at the Dubai International Stadium on Monday.
"Let's make it clear !! First and final warning for 2020. I am making it official and don't blame me later on. @RickyPonting #runout #nonstriker @AaronFinch5 and I are good buddies btw. #IPL2020," Ashwin tweeted.
In the match against RCB, Ashwin gave opening batsman Aaron Finch a warning for leaving his crease at the non-striker's end while the spinner was on course to deliver the ball.
The incident had happened in the third over of RCB's innings. Finch had walked out of his crease at the non-striker's end, but Ashwin did not do Mankad and it allowed Finch to return to his crease. The whole incident also left Delhi Capitals' coach Ricky Ponting in splits.
Before the start of IPL 2020, Delhi Capitals' coach Ponting had spoken to Ashwin regarding 'Mankad' and the former Australian skipper had told the spinner not to opt for this mode of dismissal.
'Mankading' drew a lot of attention towards itself during the last year's IPL as Ravichandran Ashwin dismissed Rajasthan Royals' Jos Buttler last season. Many former cricketers were divided as to whether the mode of dismissal is in the spirit of the game or not.
RCB failed to chase down 196 runs and was restricted to 137/9. No batsmen got going for RCB and only Kohli got among the runs as he played a knock of 43. For Delhi, Kagiso Rabada was the pick of the bowlers as he returned with the figures of 4-24.
Delhi has now gone to the top of the table with four victories and eight points from five matches. (ANI)