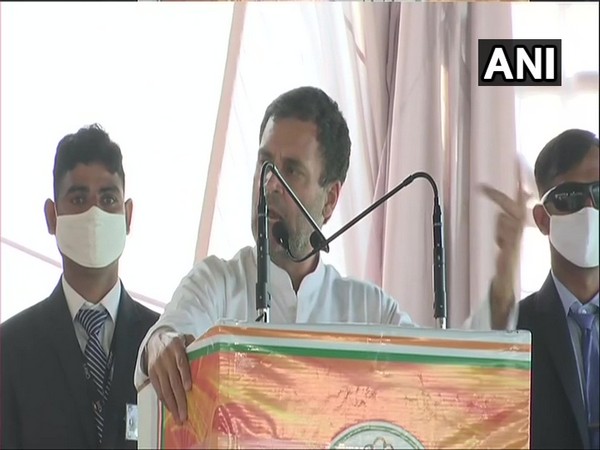 Sri Ganganagar (Rajasthan) [India], February 12 (ANI): Congress leader Rahul Gandhi on Friday said that nearly 40 per cent of people in the country were in business associated with agriculture and the new farm laws will adversely impact them.
Attacking the BJP-led central government at a rally in Padampura here, the former Congress president said the agitation by farmers against the new farm laws was a "movement".
He said the middle class will also be impacted by the new farm laws.
Gandhi said agriculture was the largest business, and unlike other businesses which are controlled by a handful of people, it involves a vast majority of people including farmers, small shopkeepers and labourers.
"This is the business of Bharat Mata and 40 per cent of India's population is part of this business. These 40 per cent of people feed the nation," he said.
Gandhi said that this business of 40 per cent people is worth Rs 40 Lakh crore. "It belongs to crores of businessmen, vendors, farmers and workers and will go into hands of just two people on the implementation of farm laws," he said.
Gandhi said agitating farmers were showing "light in the darkness".
Slamming the three laws, he said, "the first law will kill mandis, the second law will allow huge stockpiling of produce and the third law will take away farmers' right to go to court against injustice".
"This is the motive of these laws. The day these laws are implemented, remember my words, the business of 40 per cent population will go in hands of two people," he alleged. (ANI)