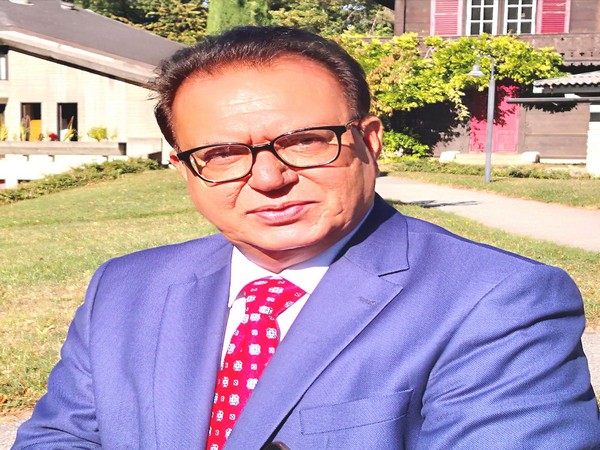 Taipei [Taiwan], September 16 (ANI): Exiled leader from Pakistan-Occupied Kashmir (PoK) Sardar Shaukat Ali Kashmiri has hit out at China for its authoritarian actions in Hong Kong and its attitude towards Taiwan.
"If China claims to be champion of self-determination, why does it not accept Taiwan's right to remain independent? Why does China always threaten them," Kashmiri said in interview to Taiwanese media.
Abducted by Pakistani agency in past, Sardar Shaukat Ali Kashmiri is now in exile in Switzerland for over a decade.
"From 1912 to 1947, China was ruled by Chinese Nationalist Party (Kuomintang). Mao and Communists came into power in 1948. In my opinion and experience, Taiwan is very democratic," he said.
"Before, Hong Kong also used to be democratic. But now China is slowly taking away the basic rights that Hong Kong people have. I believe that from the point of international community, it is unfortunate that international community is not paying attention on Taiwan, and the people of Taiwan have the right to live without fear and to enjoy sovereignity," he added.
Speaking about China's recent tension with India, he said India has legitimate claim on Ladakh and that China has nothing to do with Ladakh.
"I want to say that there is no historical evidence that Ladakh is part of China," he said.
Talking of his days in captivity by ISI, he said he was helpless. The exiled leader said his worry was parents.
"I was in detention for more than nine months. My parents were unaware of my whereabouts. When they released me, they warned that next time you talk about human rights or terrorism, we will not only arrest you but we will kill you," he said.
He also stated that Pakistani provinces are fighting with each other and some provinces are demanding independence. (ANI)