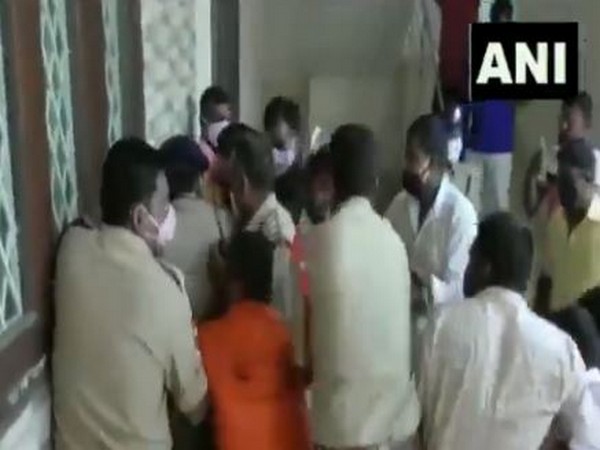 Siddipet (Telangana) [India], October 27 (ANI): Union Minister of State for Home Affairs G Kishan Reddy reached Siddipet late on Monday evening, following the huge ruckus after seizure of Rs 18.67 lakh in cash from the residence of a close relative of BJP candidate for Dubbak by-poll M Raghunandan Rao.
The relative of Raghunandan has been identified as Surabhi Anjan Rao. After the raids, the Bharatiya Janata Party (BJP) workers alleged that police brought money in a bag to plant at the location. However, Siddipet police said, "Rs 18.67 lakh cash was seized of which BJP workers snatched over Rs 12 lakhs and ran away from the spot."
"The remaining Rs 5,87,000 has been seized by the Siddipet Executive Magistrate," Joel Davis, Siddipet Commissioner of Police said.
Telangana BJP chief Bandi Sanjay Kumar was detained by police after he reached Siddipet where the raids were conducted.
Speaking about the seizure, Siddipet Commissioner of Police said that raids were conduction at three places, including the house of Siddipet Municipal chairman Raja Nararsa.
"As led by Siddipet Executive Magistrate with the help of police personnel -- we conducted searches in three places which belong to Siddipet municipal chairman Raja Nararsa, Surabhi Ram Gopal Rao and Surabhi Anjan Rao. Rs 18,67,000 in cash was found in Surabhi Anjan Rao's residence and when we asked about it, he told that it was sent by his brother-in-law Jithendar Rao through his driver as he has to use that money for the election campaign. Surabhi Anjan Rao and Surabhi Ram Gopal Rao are relatives of Ragunandhan Rao," Davis said.
Meanwhile, Ragunandhan Rao said, "I believe in democracy and Constitution and I am following Model Code of Conduct while campaigning for the polls."
"There are some reports that I am holding election campaigns illegally. So far my vehicle has been searched for 20 times. There were searches even at my home, I cooperated with the officials during raids and when I asked them to show a legal notice against me they started threatening me. They showed no search warrant and even though Mandal Revenue Officer (MRO) came for the search, there was no legal notice given to us which is completely unethical," Rao said.
Further, Union Minister G Kishan Reddy visited the house of Raghunandan's relative and condemned the entire incident. He slammed the Telangana Rashtra Samiti's (TRS)-led government in the state and said: "The brutal force used to barge into the house and the way our candidate's wife and family was treated is unbecoming and highly condemnable. I have been in public life since 1980 and have organised and contested many elections. Never have I seen any ruling party abuse state machinery like I see today."
"The BJP is the world's largest party and we have the most number of public representatives in the country with our government in many states. No karyakarta (workers) has to fear anything. I urge all karyakartas to get on field from tomorrow to ensure Raghunandan Rao Garu's victory. The way MP and party's Telangana chief has been treated shows the frustration of the ruling dispensation," he said.
He also visited Sushruta Hospital in Siddipet where BJP's Mandal president P Parasuram has been admitted after being severely injured during the clash.
Reddy consoled him and assured that there is nothing to fear "in our fight against Adharma (injustice) in the state".
The MoS said that the incidents "as they unravelled in Siddipet today are unwarranted, unjustified and unpardonable" in any standard.
Responding to these developments, All India Congress Committee Spokesperson, Dosaju Sravan also hit out at the TRS-led government in Telangana and tweeted, "Telangana Police stooped down to such a low level in Dubbak Bypolls. Does the Election Commission of India have guts to take action? Entire existing police under Siddipet Commissionerate and Dubbak must be transferred to ensure fair and free elections." (ANI)