Skip to content
Home  »  World   »   Don’t know what he’ll do: US officials puzzled over Trump’s diet rotation during India visit 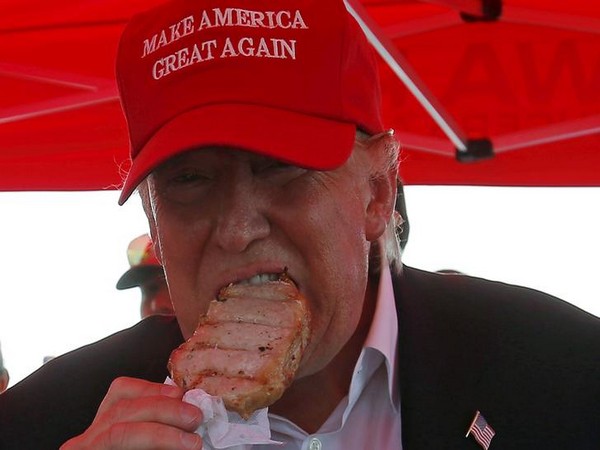 Washington D.C. [USA], Feb 24 (ANI): US officials, who have dined on several occasions with Donald Trump, on Sunday seemed to be puzzled over the change in the diet of the United States President during his 36-hours trip to India.
Trump has a salad with a meal every now and then -- but other than that, "I have never seen him eat a vegetable," the official was quoted as saying by CNN.
"I don't know what he's going to do in this case. They don't serve cheeseburgers," he added.
The President, whose diet is often a rotation of steaks, burgers, and meatloaf, may face a stark change in diet as he prepares to travel to three Indian cities this week.
Prime Minister Narendra Modi has organised an elaborate reception for the visiting dignitary, including hosting a massive rally in the world's largest stadium and arranging a tour of the Taj Mahal.
However, the Prime Minister is a devoted vegetarian and plans to serve vegetarian food such as veg-burgers, multi-grain rotis, broccoli samosas and coconut water to the US President.
Trump will sit for several meals with Modi when he is in India, including lunch and a formal banquet on Tuesday evening at ornate Rashtrapati Bhavan.
The countries visited by Trump earlier have often accommodated his diet, feeding him lamb or another alternative if steak is not on the menu, officials said.
Even one of the President's favorite fast-food restaurants, McDonald's, does not serve beef in India. Instead, locals dine on chicken burgers or fried paneer and cheese sandwiches.
The US President will arrive in Ahmedabad in a few hours from now. He will be accompanied by First Lady Melania Trump, daughter Ivanka Trump and his son-in-law Jared Kushner.
On his first visit to India, President Trump will land in Ahmedabad, the largest city in PM Modi's home state Gujarat.
The first couple of US will be given a grand welcome as they drive to the newly-built Sardar Vallabhbhai Patel Cricket Stadium.
He will then fly to Agra to visit the Taj Mahal and then to Delhi to engage in delegation-level talks. (ANI)