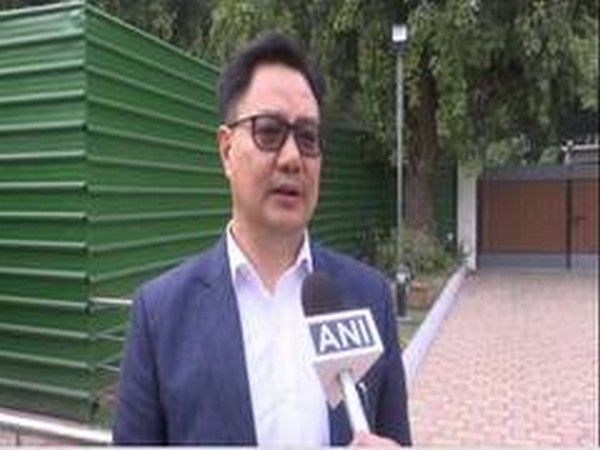 New Delhi [India], May 29 (ANI): Union Minister for Youth Affairs and Sports Kiren Rijiju and 2012 London Olympics bronze medallist Gagan Narang on Friday discussed the importance of fitness with former stressing that developing a sports culture in India can lead the country towards excellence.
Both Rijiju and Narang spoke on a wide range of issues during a webinar, titled "Fitness! A Way of life". The discussion was moderated by renowned sports commentator Manish Batavia and was organised by the Institute of Company Secretaries in India in association with Fit India.
"We have a tradition of sports in our country but have unfortunately not become a big sporting nation because sport has not become a culture. We need to draw inspiration from the past. Khelo India is a great initiative, we are reaching out to every nook and corner of the country," Rijiju said during the discussion.
"It can't be that children want to play, but they need the opportunity. Once we have sports culture, we can create excellence. We need to move children away from electronic gadgets. We need to have an active culture. Natural growth of human beings should be allowed to take place at own pace," he added.
The minister added that more than 1.6 lakh schools have got registered under the Fit India Movement.
The 2012 London Olympics bronze medallist in 10m Air Rifle, Gagan Narang, emphasised on the importance of mental fitness and why physical and mental fitness must complement each other.
"Shooting is 98% mental, 2% physical. In this current lockdown scenario, the role of being mentally fit is very important. If you aren't mentally fit to make decisions it reflects poorly. Physical and mental fitness complement each other," said Narang.
"If you aren't mentally fit, you don't get the thought. Shooting is a tough sport to play, and it takes a lot of physical and mental fitness to play it. The demand of shooting is such nowadays with the kind of competition there is, that you can't compete at the highest level without being physically fit," he added.
The Minister and Narang also spoke on the upcoming Yoga day and said that not only is it a great form of fitness but has considerably improved India's image on the world stage.
Rijiju said, "After Buddhism, Yoga is the biggest soft power that has gone out of India. I am very happy about the way Yoga has transformed the image of India. Major cities of the world, smaller towns and villages are doing Yoga. It is one of the best ways of remaining fit."
Narang said that in his academies, they make sure that Yoga and other physical fitness activities complement shooting.
Rijiju also spoke about reactivating indigenous sports and activities and while they may not be a part of the Olympics and Asian Games as yet, he will be looking at integrating them into competition from next year.
Narang also spoke about the lockdown and how not just athletes but others must take the positives away from the entire experience.
"Lockdown has given us self-realisation. What we used to think is valuable, is not valuable anymore. Eating right and at the right time is very important. Because of the lockdown, people are taking care of their health. The lockdown has been a boon for some. We must take the lessons of this lockdown. Take care of our mind, body, families and become a positive human being," he said. (ANI)