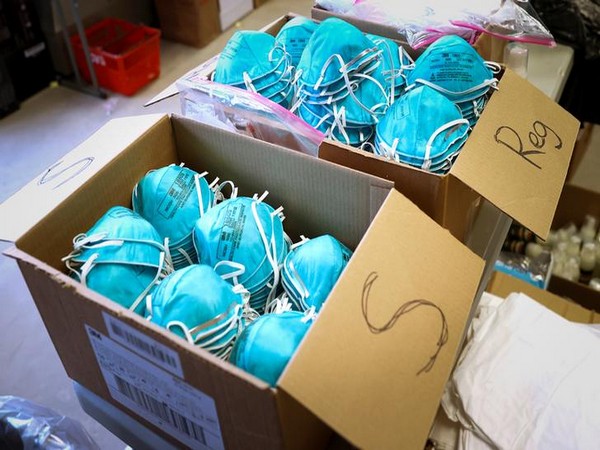 Islamabad [Pakistan], April 5 (ANI): China has not even spared its 'all-weather ally' Pakistan. Promising to provide testing kits and top-quality N95 masks to Pakistan in a bid to help the country that has been crippled by the lethal coronavirus outbreak, Beijing actually duped its 'friend' by sending in masks made out of underwears.
Reporting the news, a local Pakistani news channel said, "China ne chuna laga diya" (China conned us) and further notified that the Sindh provincial government sent the masks to hospitals without checking.
"In the name of to-quality N95 masks, China has sent in masks made out of underwear. It was also a lacuna on the part of the provincial health authorities who received the medical aid. Without proper checking, the masks were sent to Qatar hospital in Karachi. Over there, the doctors and para-medical staff called it buffooning by China," Lahore-based News Break TV reported.
Late last month, China had asked Pakistan to open the border between the two countries for one day on Friday so that medical supplies to fight coronavirus pandemic could be sent.
The Chinese embassy in a letter to the Ministry of Foreign Affairs said that the governor of Xinjiang Uyghur Autonomous Region of China would like to donate a batch of medical materials to Gilgit-Baltistan, the Dawn reported.
According to the letter, the governor had donated 200,000 ordinary face masks, 2,000 N-95 face masks, five ventilators, 2,000 testing kits and 2,000 medical protective clothes mainly used by doctors and paramedics to fight with the virus, which originated in China late last year.
According to local media reports, the rise in the tally of active cases related to COVID-19 infection has subsided in the Chinese mainland and therefore, the country has been promising to help other countries, especially those whose economies have been severely affected by the ongoing crisis. But this was not the first case where reports have emerged of China sending low quality medical aid to various countries.
The Nepal government has scrapped a major deal for coronavirus testing kits and protective gears signed with a private Chinese company after finding them be of sub-standard quality, according to a senior official, the media reported.
In another incident, Spain, last week, had sent back to China millions of purchased kits.
Up to 80 per cent of the 150,000 portable, quick coronavirus test kits China delivered to the Czech Republic earlier this month were faulty, National Review reported citing local Czech news site Expats.cz.
The test can produce a result in 10- 15 minutes but are really less accurate than other tests, the media reported.
The China-originated deadly bug has infected around 12 lakhs people globally while the total tally of death has surpassed 65,000, according to the data compiled by US-based John Hopkins University.
Global money lenders including the World Bank and the International Monetary Fund (IMF) have predicted that East Asia and the Pacific could see up to 11 million people driven into poverty, with low wage and informal sector workers becoming the most vulnerable, as an economic impact of COVID-19 pandemic. (ANI)