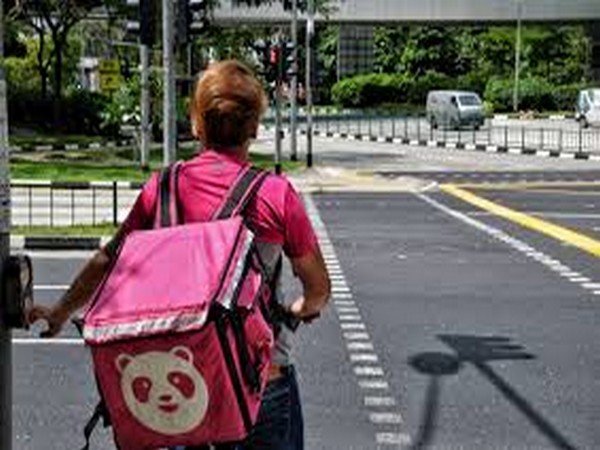 By Lee Kah Whye
Singapore, April 20 (ANI): Singapore's home food delivery companies have never had it so good as in the current COVID-19 pandemic with sales touching record numbers, a sharp contrast to the rest of the Economy, which has virtually come to a standstill.
This week, Singapore will enter the third week of its 4-week shutdown (April 7 to May 4) to stem the spread of the COVID-19 pandemic.
Although the island state handled the initial outbreak well, earning the praise of WHO (World Health Organisation) as well as other countries, it has succumbed to a second and a third wave of infections which has left its health services stretched but fortunately still coping. As of writing, Singapore has reported over 6,500 cases of COVID-19 infection and 11 deaths, with the highest number of new cases reported on Saturday (April 18) of 942.
The second wave was likely to have been caused mainly by overseas Singaporeans returning from neighbouring countries as well as Europe, UK and the US as the spread of the pathogen caused these countries to shut their borders.
Unaware of the severity of the spread of the disease in these countries, the initial returnees were requested to stay at home for 14 days by the Singapore authorities. However, many didn't adhere to the request.
Most such returnees from highly infected countries were asymptomatic and could have been unwitting carriers of the disease, leading to community spread. Subsequently those returning home were served legally binding orders to quarantine themselves or were sent to official quarantine locations including hotels.
The third wave, which some have described as Singapore's cruise ships, is spreading in foreign worker dormitories. Singapore has about 300,000 foreign workers, mostly from India and Bangladesh, in the construction and labour-intensive industries which the locals shun.
These migrant workers are housed together in small living spaces with cramp common areas for cooking and recreational - an environment which makes it easy for the virus to spread. So far, 12 out of 43 such large-scale facilities have been declared "isolation areas" which means all residents must serve a minimum period of 14 days isolation in their rooms. At the moment, these workers form more than 60 percent of Singapore's COVID-19 cases.
With community spread and rising numbers, the Singapore government decided to impose draconian restrictions in the movement of its residents. Schools and workplaces were closed, and only essential services are allowed to operate.
Restaurants, hawker centres and other food establishments are closed to dine-in services and patrons can only order take-away. To minimise risks, many residents also have taken to using online and app-based food delivery services.
Unlike in India, where it's common to eat at home, in Singapore it's quite the opposite. There is a culture of eating out in Singapore as food is easily assessible, delicious and very reasonably priced. Many families eat more than half their meals out.
Although during this lockdown period, many have started to cook at home, there is still a huge demand for food delivery services. In Singapore, this is dominated by three major players - Food Panda, Deliveroo and Grab Food.
Many have complained that the big three food delivery platforms are taking advantage of the current situation to increase their bottom-lines. This has led to a petition which went online on April 15 to lower commissions paid by F&B outlets to food delivery platforms on Change.org initiated by #savefnbsg. This coalition of over 500 restaurants is led by two of the best-known restaurateurs in Singapore. It has garnered about 4,000 signatures so far.
In an open letter to the Prime Minister of Singapore dated April 4, among other things, #savefnbsg said that "commissions of 30 per cent charged by delivery firms such as Grab and Deliveroo are too prohibitive for restaurants already operating on thin margins. We ask for help in negotiating lower rates to make delivery options financially viable for us."
The coalition suggested on its website that a 15 per cent commission rate for food delivery services is more appropriate giving the example of San Francisco which has mandated a cap of 15 per cent on commissions.
It further claimed that as many as 80 per cent restaurants in Singapore may have to close their businesses within 30 days should the situation not improve. Furthermore, 81 per cent expect to lay off staff in the immediate future. The website also displayed a graphic which showed that restaurants only make 50 (Singapore) cents net profit from a SGD25 order after paying various costs including delivery commissions.
Addressing food delivery platforms, the petitioners say, "nobody has ever liked the rates imposed on us but we tolerated them because in the not-so-distant past, the money from your sales didn't form a core pillar of our revenue streams. We watched in frustration as your commission increased steadily from 20 per cent to 30 per cent."
To counter this, a few restaurants and eateries are attempting to set-up their own delivery services. Some are grouping together to hire their own drivers, use under-utilised private hire and cab drivers or make deliveries themselves. They also offer discounts for customers who pick up their own orders.
Delivery platforms interviewed by The Straits Times claim that the commission they earn do not entirely go into their own pockets but goes towards paying delivery partners, operating costs, fleet insurance, marketing costs and after-sales support. They also deny increasing commission charged during this period. Instead, at least one has said that they have changed from paying restaurant partners monthly to weekly to help them with their cash flow.
(Disclaimer: The views expressed in this column are strictly those of the author) (ANI)