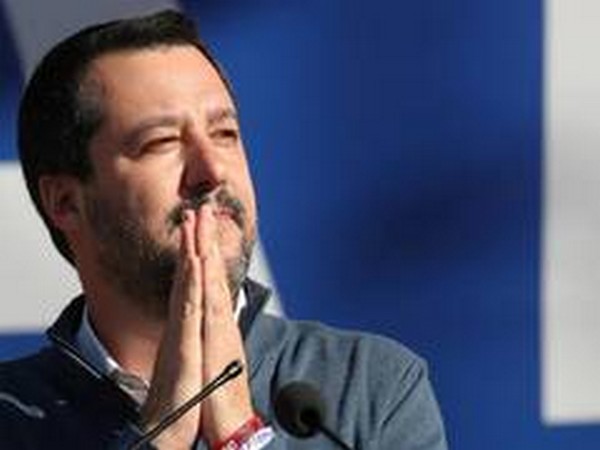 Italy [Rome], October 3 (ANI): An Italian court summoned former Deputy Prime Minister Matteo Salvini on Saturday on charges of kidnapping more than a hundred migrants in an attempt to boost his popularity.
Prosecutors in the southern Sicilian city of Catania accused the far-right leader of misusing power.
In July 2019, Salvini as the interior minister had refused to allow 131 migrants and refugees, including 15 unaccompanied children to alight from the Gregoretti coastguard ship for five days.
He faces up to 15 years of jail for aggravated kidnap. A preliminary hearing judge will decide on Saturday whether the case is strong enough to proceed with the trial, Al Jazeera reported.
"If the court judges him innocent, he will re-emerge with new strength from his current decline, as he will be able to play the card of the victim haunted by the judiciary," Anna Simone, a professor of sociology at Roma Tre University told Al Jazeera.
"But if he is convicted, that will be Salvini's political definite downfall," she added.
Salvini has been holding rallies in the Sicilian city for the past three days where on Friday he commented, "I'll head to the court with peace of mind and a clear conscience to have saved lives and defended my country."
His political supporters include the far-right leader Giorgia Meloni and the representatives of Silvio Berlusconi's right-wing party Forza Italia, who are expected to attend the rally where a 500-strong police force has been deployed to prevent clashes between Salvini supporters and left-wing protesters.
When the left-wing politician first took to office as the Interior Minister in 2018, he declared Italy's ports off-limits to rescue ships, which triggered a series of stalemates between rescue vessels and the Italian authorities.
It would be the first time Salvini's "closed ports" policy would be tried, provided the court decides to proceed. A second hearing is assured to happen for his illegal imprisonment of 107 migrants on board of the Open Arms rescue ship, in August last year, even though no date has yet been set.
Prosecutors have charged Salvini with abuse of power by depriving the people on board the Gregoretti their personal freedom and for violation of law under which he had a responsibility to provide a "place of safety" for the rescued people, Al Jazeera wrote.
However, Salvini claims that his actions were directed towards the "common interest" and that the waiting was imperative to reach an agreement about the redistribution of the refugees and migrants with other countries. His defense team claims that the decision to hold the migrants was taken along with the government.
According to Al Jazeera, some believe that Salvini's trial shows that Italy is taking the abuse of refugees and migrants more seriously. Local elections two weeks ago saw gains by the left-wing Democratic Party, as it requested a revision of Salvini's anti-migrant mandates, which is expected to be approved within a few weeks.
The lawyer representing Open Arms and president of the Italian Coalition for Civil Liberties Arturo Salerni said that the two trials are restricting "what seemed to be a freefall in xenophobic feelings".
He further said, "The fact that the court says that a minister has to be tried for kidnapping on two different instances because people's human rights and international conventions can't be considered as waste paper, well that is a guarantee that certain things can't be done with impunity." (ANI)