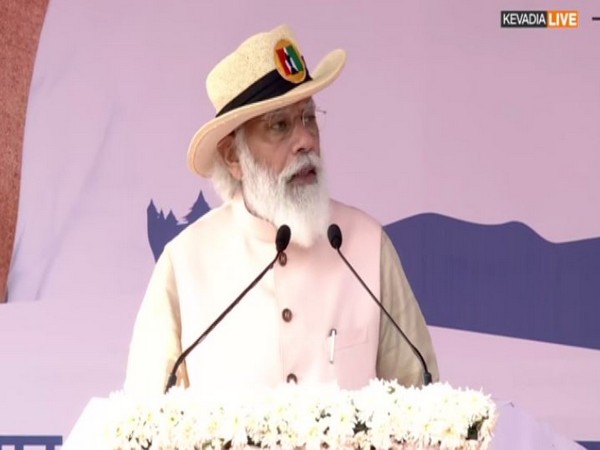 Kevadia (Gujarat) [India], October 31 (ANI): Prime Minister Narendra Modi on Saturday said that the country is establishing new dimensions of unity as Jammu and Kashmir has moved on a new path of development.
"Today, Kashmir has moved on a new path of development...Whether it is the restoration of peace in the Northeast, or the steps being taken for development there, today the country is establishing new dimensions of unity," Prime Minister said in Gujarat on the birth anniversary of Sardar Vallabhbhai Patel
"A seaplane service from Sardar Sarovar to Sabarmati riverfront will be started today. This will help boost tourism in this area," said PM Modi at the Statue of Unity here.
"Sardar Patel gave the present form to India by making the diversity of the country, power of free India by uniting the hundreds of princely states of the country. In 2014, we all started celebrating his birthday as a festival of the unity of India," he added.
The Prime Minister continued saying that the entire country is paying reverence to the Iron Man of the country, Sardar Patel today.
"Today, once again, this country is repeating its pledge for the progress of the country under Sardar Patel's guidance," he added.
Prime Minister Narendra witnessed the 'Rashtriya Ekta Diwas' parade on the birth anniversary of Sardar Vallabhbhai Patel in Kevadia, Gujarat.
Parade in its tableau included National Disaster Response Force (NDRF) vehicles--Medical First Respondent (MFR), Flood Water Rescue (FWR) vehicle, Border Security Force's (BSF) Mine Protected Vehicle (MPV) and Central Reserve Police Force's (CRPF) Critical Response Vehicle.
CRPF Women Warriors' also performed a rifle drill while the Department of Sports Youth and Cultural Affairs, Gujarat State performed a cultural dance.
The Prime Minister also administered the Rashtriya Ekta Pledge here.
Earlier today, the Prime Minister paid tribute to Sardar Patel at the Statue of Unity in Kevadia, Gujarat.
PM Modi is on a two-day visit to Gujarat, the first time since the COVID-19 outbreak and the subsequent lockdown in March, to mark Rashtriya Ekta Diwas, celebrating the birth anniversary of Sardar Patel.
Earlier today the Prime Minister tweeted, "A humble tribute to Iron Man Sardar Vallabhbhai Patel, the pioneer of national unity and integrity, on his birth anniversary. Tributes to the great Sardar Patel on his Jayanti."
Sardar Patel, who is credited with uniting all 562 princely states of the pre-independent country to build the Republic of India, passed away on December 15, 1950. (ANI)