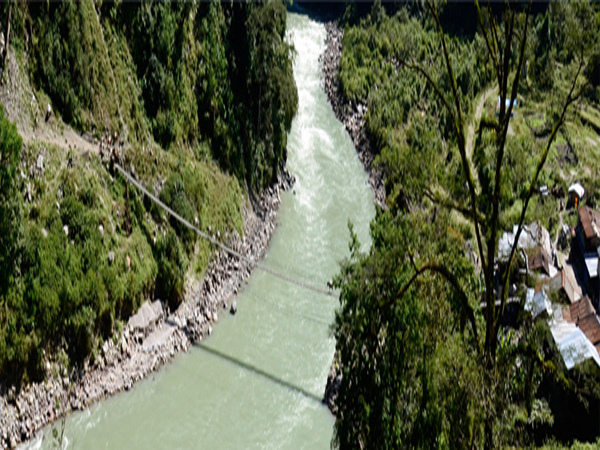 Kathmandu [Nepal], Aug 16 (ANI): The construction of Arun-III hydropower project in Nepal's Sankhuwasabha district is on fast-track as five Indian banks and two Nepali banks have committed to lend debts for construction of the 900 MW mega power project.
In February, Nabil Bank, which is one of the lenders for the project from Nepali side, signed a pact with India's Satluj Jal Vidyut Nigam (SJVN), setting a record of largest ever foreign direct investment to the Himalayan nation.
Arun-III is Nepal's largest hydro project and is being built with India's assistance.
Anil Keshari Shah, CEO of Nabil Bank said, "This type of engagement of Nepali banks during the construction of Arun-III hydropower project will test capability of Nepali banks as well as lend new experience in these types of big projects."
"Our engagement with SJVN for Arun-III has increased our aptness. Back in February, we had a financial closure which means we will be on ground to support them which in turn will be support for the whole nation," Shah said.
"Apart from experience for us, the project also provides employment to locals. As we are associated with the project, we will have the benefit that salary of employees will go through our bank. Also, the transactions for purchase of goods and materials will also be made through us. It is indeed a new experience for us," he added.
Everest Bank and Nabil Bank from Nepal agreed to provide debt of 1,536 crore Nepali rupees for the project whereas five Indian banks -- State Bank of India, Punjab National Bank, Axim Bank, and UBI have pledged 8,598 crore Nepali rupees for the same.
The total debt tied up with banks is 7,860 crore Nepali rupees plus 2,274 crore Nepali rupees as a stand-by line of credit. The SJVN Arun-3 Power Development Company Pvt. Ltd, incorporated for construction of the project on April 25, 2013, will be investing approximately 11,000 crore Nepali rupees in Nepal over the next five years.
The total investment of the project is estimated to cross Rs 115 billion, including Rs 11 billion for the development of the transmission line. With the completion of the project, Nepal will get 21.9 per cent of the total electricity produced in a year i.e. 197 MW electricity with 86 crore units for free in a year.
The foundation of Arun-III project was jointly inaugurated by Indian Prime Minister Narendra Modi and his Nepali counterpart KP Sharma Oli in May 2018. Arun-III has 3.65 hours of minimum peaking capacity envisaged for installation of four generating units of 225 MW each gives the project a total installed capacity of 900 MW.
The estimated cost of the project to be completed within five years stands at USD 1.04 billion and would produce 4,018.87 million units of electricity a year.
The project is being developed on a build-own-operate and transfer (BOOT) basis by SJVN Arun-III Power Development Company (SAPDC), a joint venture of the Government of India and the Government of Himachal Pradesh.
The SJVN signed a Memorandum of Understanding (MoU) for the execution of the project with the Government of Nepal in March 2008.
With the deal finalised and the construction in full swing, the SJVN will operate the power plant for a concession period of 30 years, following which the ownership will be transferred to the Nepal government. It will provide 21.9 per cent of free power to Nepal during the concession period.
The project is expected to generate 3,000 jobs during construction in India and Nepal together. (ANI)