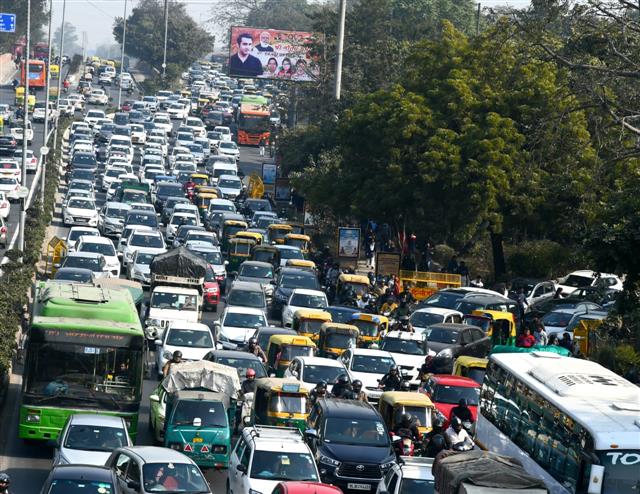 Commuters had a harrowing time on Monday morning as they found themselves stuck in long jams on Central Delhi roads owing to restrictions made ahead of the Republic Day Parade rehearsal.

Vikas Marg (from Laxmi Nagar to ITO), Pragat Maidan and Akshardham were three of several such stretches which witnessed intractable snarls.

Ankita Singh, a commuter, said, “Traffic from Noida till Akshardham was heavy. The route leading towards ITO also had jam and the GPS showed 40 minutes to cover a distance of around 6 km.”

Several commuters took to Twitter to inform others about the traffic situation in the city, with one of them reporting heavy jams on ITO, Pragati Maidan and Geeta Colony flyover.

While one said that traffic did not move at ITO for over an hour, another commuter, who said he was stuck in jam for two hours, advised people against venturing out on roads.

Prerna Singh, who works in central Delhi, said, “I live in southern part of the city and reach my office within an hour and a half. However, there were several roads that were closed on Monday probably due to rehearsal of Republic Day and my cab took an extra 30 minutes to drop me to my place.”

The Delhi Traffic Police had issued an advisory on the arrangements and restrictions for the smooth conduct of Monday’s full-dress rehearsal for the Republic Day parade.

The rehearsals started at 10.30am from Vijay Chowk and passed via the Kartavya Path, C-Hexagon, the roundabout statue of Netaji Subhas Chandra Bose, Tilak Marg, Bahadur Shah Zafar Marg, and Netaji Subhas Marg before concluding at the Red Fort.

According to the advisory, no traffic was allowed on Kartavya Path from Vijay Chowk to India Gate from 6pm on Sunday till the end of the parade on Monday.

Vehicular movement was also banned on the Kartavya Path at Rafi Marg, Janpath, and Man Singh Road from 11pm on Sunday till the parade ended. The C-Hexagon-India Gate was closed from 9.15am on Monday till the parade crosses the Tilak Marg, the advisory stated.

Traffic on both sides of the roads was not be allowed on Tilak Marg, Bahadur Shah Zafar Marg and Subhash Marg from 10.30am. Cross-traffic was allowed only depending on the movement of the parade, it said.