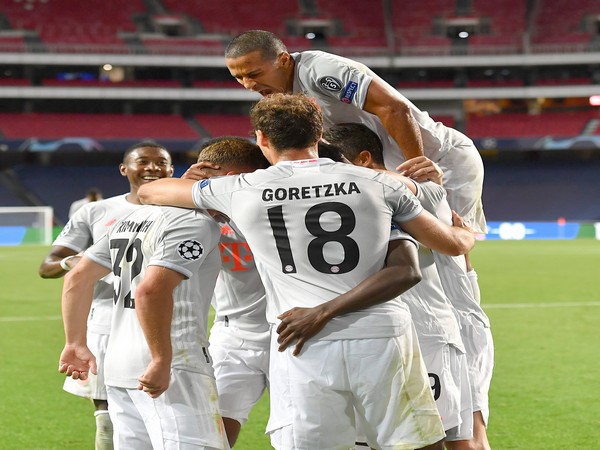 Lisbon [Portugal], Aug 15 (ANI): Bayern Munich stunned Barcelona 8-2 in the Champions League quarter-final on Friday (local time) at the Estadio da Luz Stadium here to progress to the semi-finals of the tournament.
In the match, Barcelona conceded four goals in the first half of the match for the first time in the Champions League.
Barcelona ended up conceding more than eight goals in a game for the first time since losing 8-0 to Sevilla in the Copa del Rey's last 16-match in 1946.
The match between Bayern and Barcelona got off to a fiery start as it saw two goals in the first seven minutes.
Thomas Muller opened the scoring for Bayern as he registered the goal in the fourth minute, whereas Barcelona got the equaliser in the seventh minute due to an own goal by David Alba.
However, things went downhill from there for Barcelona in the first half, as Bayern went on to score three more goals to gain a 4-1 lead.
Ivan Perisic, Serge Gnabry and Muller registered the goals in the 21st, 27th and 31st minutes respectively to give Bayern an upper hand in the match.
In the second half, Barcelona struck first in the 57th minute as Luis Suarez scored the goal to bring the scoreline to 4-2 in favour of Bayern.
However, from there, Bayern registered four more goals in the second half to win the match 8-2.
Joshua Kimmich registered the goal in the 63rd minute and he was followed by Robert Lewandowski in the 82nd minute to bring the scoreline 6-2 in favour of Bayern.
The final nails in the coffin were struck by Phillipe Coutinho as he scored a brace in the 85th and 89th minute to give Bayern a whopping 8-2 win in the match.
Now, Bayern will face the winners of the match between Manchester City and Lyon in the semi-finals of the tournament on August 19. (ANI)