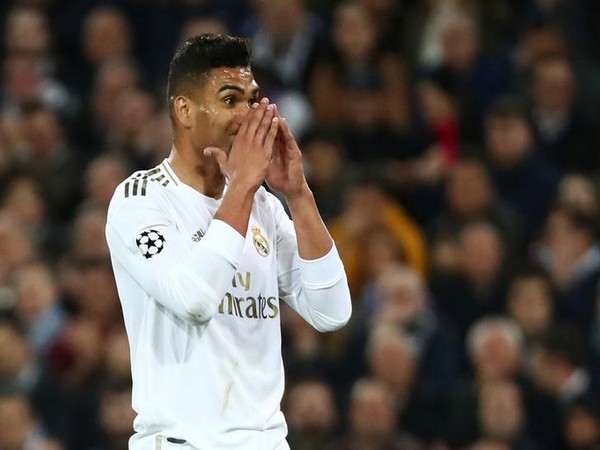 Madrid [Spain], Feb 27 (ANI): Real Madrid's Casemiro is confident that his club can make a comeback against Manchester City after facing a 2-1 defeat in the first leg of their Champions League last-16 tie on Thursday.
"The tie is not over, because if there is a team that can stage a comeback, it's this Real Madrid side. We played 75 spectacular minutes, but in the last 15 things went wrong," the club's official website quoted Casemiro as saying.
"They got the better of us, but everything is not lost. We did not have the intensity or the control in the last 15 minutes. We sat back, against a top rival if you let them have a couple of shots, they'll get a goal. There are no excuses for that," he added.
Real Madrid's Isco scored the opening goal of the match in the 60th minute.
Gabriel Jesus' strike in the 78th minute levelled the scores and later in the 83rd minute, Kevin De Bruyne scored a goal through a penalty to hand Manchester City a win. The second leg between both clubs will be played on March 18.
Real Madrid are now scheduled to take on Barcelona in La Liga and Casemiro wants to solely focus on his club's upcoming match and try not to repeat the same mistakes.
"The City game is now a thing of the past, we have to focus on the Barcelona match. The mistakes we've made tonight can't happen again. We had a 15-minute spell that we can't afford to repeat. We've now got to think about Barcelona," Casemiro said.
Real Madrid will compete against Barcelona on March 2. (ANI)