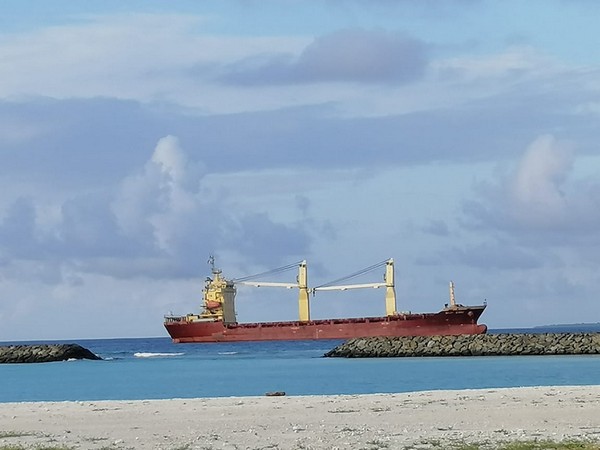 Kulhudhufushi [Maldives], September 26 (ANI): The cargo vessel MCP Linz operated by the Shipping Corporation of India (SCI) reached anchorage at the northern Maldivian town of Kulhudhufushi on Saturday.
MCP Linz connects Tuticorin and Cochin ports in India with Kulhudhufushi and Male ports in the Maldives.
"The cargo vessel MCP Linz operated by the Shipping Corporation of India reached anchorage at the northern Maldivian town of Kulhudhufushi today. Despite a lockdown imposed at Kulhudhufushi, the vessel was received with fanfare. Today, a virtual event-- attended by the Foreign Minister of Maldives Abdulla Shahid, the Transport Minister Aishath Nahula, the Island Council of Kulhudhufushi and the High Commissioner of India Sunjay Sudhir-- was held to receive the vessel," read a press statement.
As per the press statement, the maiden voyage of the direct Cargo Ferry Service between India and the Maldives was jointly launched on September 21 by Mansukh L Mandaviya, Minister of State for Shipping (Independent Charge) of India, and Aishath Nahula, Minister of Transport and Civil Aviation of the Maldives in a virtual ceremony. This is the first ferry service in the Indian Ocean region operated by the SCI. The service is expected to enhance bilateral trade and bring down costs for consumers.
The Cargo Ferry Vessel MCP Linz operated by the SCI connects Tuticorin and Cochin ports in India with Kulhudhufushi and Male ports in the Maldives. The vessel is carrying garments, food items, kitchen equipment, coir pith, machinery tools, etc for the Maldives on its maiden voyage. It is expected to arrive in Male on September 28. The MCP Linz is a combination vessel which can carry 380 TEUs and 3000 MT on bulk cargo, and will have a turnaround time of 10-12 days for its voyages, the press statement said.
The vessel has reefer plugs for refrigerated containers. This vessel provides direct cargo connectivity between India and the Maldives on a predictable and affordable basis for the first time, and will lower costs and time for traders in both countries.
The press statement said, "In his address to the People's Majlis during his State Visit to the Maldives in June 2019, Prime Minister Narendra Modi announced India's commitment to start a ferry service connecting India and the Maldives. An MoU was signed between the Ministry of Shipping in India and the Ministry of Transport, Maldives, on the sidelines of the state visit. The decision to commence the Cargo Ferry Service between the two nations was announced during a virtual meeting between EAM Dr S Jaishankar and Foreign Minister Abdulla Shahid on August 13, 2020."
Nurtured by close historical and cultural ties, trade between Indians and Maldivians has gone on for centuries. The Cargo Ferry Service is visioned as a key instrument to upgrade the trade partnership. Besides the expansion of markets for MSMEs in India, the cargo ferry service will provide an opportunity to Maldivian exporters of tuna and other marine products to explore the vast Indian market and also the European markets through Cochin and Tuticorin ports.
The Cargo Ferry Service is another commitment delivered by India to connect Indian and Maldivian markets, unlock the trade and investment potential between the two nations, and, strengthen people-to-people contacts for mutual prosperity. The service is a key connectivity initiative between the two countries and gives voice to the aspirations of the people of India and the Maldives.
It is a concrete outcome realised by the 'Neighbourhood First' policy of India and the 'India First' policy of the Maldives under the leadership of PM Modi and President Ibu Solih, the press statement added. (ANI)