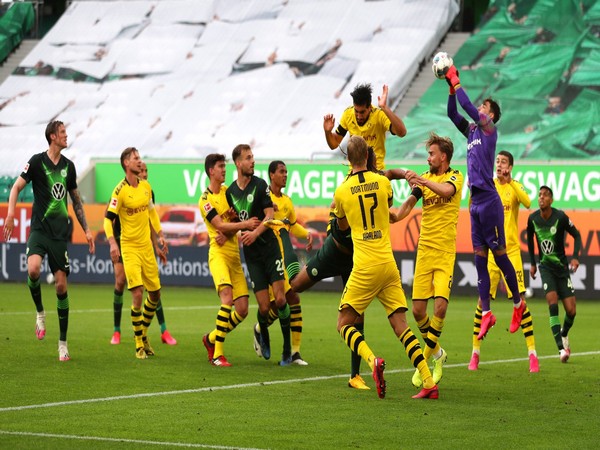 Wolfsburg [Germnay], May 24 (ANI): Borussia Dortmund continued to display dominating performance after the return of Bundesliga as they defeated Wolfsburg by 2-0 here on Saturday.
Raphael Guerreiro scored the opening goal of the match, handing his side a 1-0 lead in the 32nd minute. Although no more goals were netted in the first half, Borussia Dortmund completely overpowered their opponents.
The second half also witnessed a similar performance by Borussia Dortmund as the club managed to take their lead to two against Wolfsburg with the help of Achraf Hakimi's strike.
Heading into this game, Borrusia Dortmund were high on confidence as they had registered a 4-0 win in their previous match while Wolfsburg had suffered a 4-1 defeat against Leverkusen in their previous encounter.
Also, Borussia Dortmund had not lost against the Wolves in any of their nine Bundesliga meetings since their 2015 DFB Cup final defeat.
Borussia Dortmund are now just four points away from the top-placed club, Bayern Munich, on Bundesliga table. (ANI)