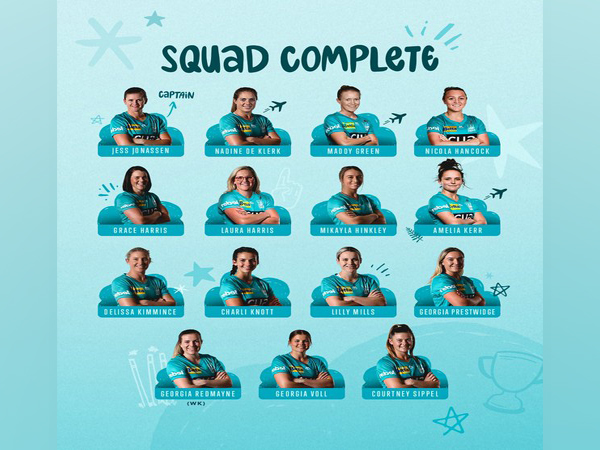 Brisbane [Australia], Aug 28 (ANI): Brisbane Heat on Friday finalised their squad for the upcoming Women's Big Bash League (WBBL) season, with recruits Georgia Redmayne, Nicola Hancock, and Georgia Voll completing their 15-player list.
Australia 'A' wicket-keeper Redmayne has previously played in the WBBL with Hobart and Perth but will turn to teal in the upcoming season, scheduled to begin on October 17.
Former Hobart Hurricanes, Melbourne Renegades and Melbourne Stars seamer Hancock, also a former Australia 'A' representative, will join the two-time champions, adding valuable experience and pace bowling depth to the squad.
Brisbane Heat have also re-signed Charli Knott.
WBBL Heat coach Ashley Noffke said the squad contains depth as well as match-winning potential.
"We feel confident we are in a good position to give our best with this group in the coming season. It's great to have two experienced and talented players in Georgia and Nicola coming into the group, and we will look to give them every opportunity to showcase their skills," Brisbane Heat's official website quoted Noffke as saying.
"They have both been Australia 'A' players and it would be rewarding to assist them to further improve their individual games along the way. We're very pleased to secure Georgia Voll for the Heat... We're working hard on our skills and will be keen to make the most of the opportunities that we can create when the WBBL gets underway," Noffke added.
Brisbane Heat squad: Jess Jonassen (c), Delissa Kimmince, Maddy Green, Amelia Kerr, Nadine de Klerk, Georgia Prestwidge, Georgia Redmayne, Georgia Voll, Nicola Hancock, Grace Harris, Laura Harris, Charli Knott, Mikayla Hinkley, Lilly Mills, Courtney Sippel. (ANI)