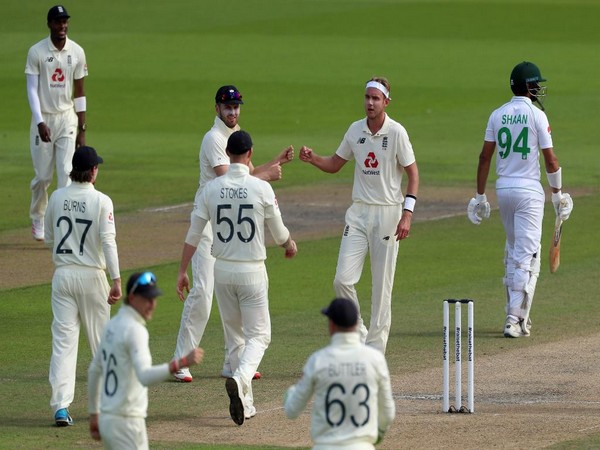 Manchester [UK], Aug 8 (ANI): Pakistan have taken a 244-run lead over England on day three of the first Test here on Friday.
Pakistan had racked up 326 runs on the board in their first innings while England only managed to score 219 runs in their first innings. However, England bowlers brought the team back in the game as they have already reduced the visitors to 137/8 in their second innings.
Resuming the day from 92/4, England got off to a good start as both Jos Buttler and Ollie Pope played cautiously. Pope went on to complete his half-century and formed a brilliant 65-run partnership with Buttler.
Naseem Shah provided Pakistan with the first breakthrough of the day as he got hold of Pope (62). Chris Woakes then came out to bat but his partnership with Buttler did not last long as the latter was sent back to the pavilion by Yasir Shah.
The fall of wickets did not stop as Yasir Shah then dismissed Dom Bess (1) and Woakes (19), reducing England to 170/8. England managed to went past the 200-run mark, thanks to Stuart Broad's unbeaten knock of 29 runs. Yasir Shah took four wickets, helping Pakistan to end England's first innings.
Having a 107 runs lead, Pakistan began their second innings. Pacer Stuart Broad dismissed Shan Masood, who had scored 156 runs in the first innings, on a duck. Opener Abid Ali was then joined by skipper Azhar Ali.
Abid Ali scored 20 runs before he was sent back to the pavilion by Dom Bess. Soon after that, Chris Waokes removed Babar Azam (5), putting the visitors under pressure.
Woakes then ended Azhar Ali's 18-run innings after the batsman was given LBW. England bowlers continued their dominance and kept on taking wickets to put their side back on track in the match. Mohammad Abbas and Yasir Shah will resume Pakistan's second innings on day four. (ANI)