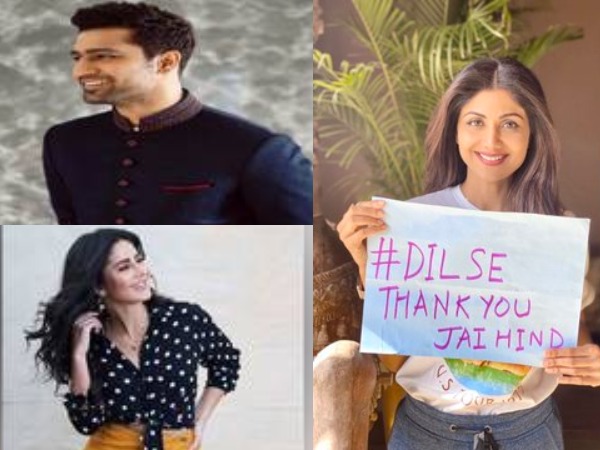 New Delhi [India], April 9 (ANI): Several Bollywood actors on Thursday expressed gratitude to the police force for working tirelessly to contain coronavirus.
Actors including Katrina Kaif, Vicky Kaushal and others put out their gratitude on their social media handles.
'Bang Bang' actor Katrina Kaif hopped on to Instagram and thanked the police officials through both an Instagram post and a story.
In the story, Kaif posted a picture of the 'Mumbai Police' badge on the uniform of the officials and wrote: "Thank You."
She also posted a video of the police officials on duty and wrote, "Thank You Mumbai Police. Saluting the bravery and dedication of the Mumbai Police and Maharashtra Police who are working so hard while we stay in the safety and comfort of our homes."
"Tremendous respect for all of you #DilSeThankYou #StayHome #MumbaiPolice #MaharashtraPolice," her caption further read.
'Uri: The Surgical Strike' actor Vicky Kaushal took to Twitter and thanked Mumbai's Director General of Police (DGP) and the rest of the officials.
"My heartfelt thanks and salute to each and every braveheart of @MumbaiPolice and @DGPMaharashtra who are out there, selflessly and relentlessly fighting the battle for all of us. You are the real heroes and I'm your fan for life! #ThankYouMumbaiPolice #ThankYouMaharshtraPolice," he tweeted.
Actor Shilpa Shetty Kundra thanked the police officials in a special by posting a picture of herself holding a placard that read, '#Dil Se Thank You. Jai Hind.'
"Mumbai se main, Shilpa Shetty Kundra, apne aur apne poore parivaar ki orr se @MumbaiPolice, @mybmc, Nagar Nigam ke workers, doctors, nurses, NGOs, volunteers, govt. officials, vendors, building ke guards ko #DilSeThankYou kehna chahti hoon. Aap hain isiliye hum surakshit hain," she tweeted along with the picture.
The new hashtag was firstly used by actor Akshay Kumar to express gratitude to Mumbai Police. Kumar further urged others to use the hashtag.
Many other Bollywood celebrities including actors Hrithik Roshan, Shahid Kapoor, Madhuri Dixit Nene, Anil Kapoor, Ajay Devgn, and film director Karan Johar. (ANI)