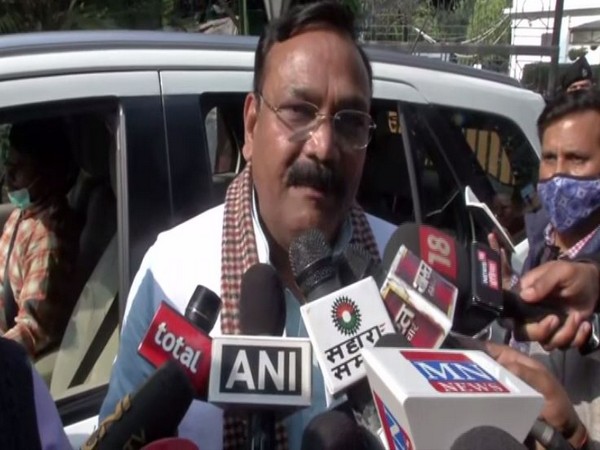 New Delhi [India], February 17 (ANI): Alleging that a party is sending its members to farmers' protest and spreading propaganda about the farm laws, BJP's national Kisan morcha president Rajkumar Chahar on Wednesday urged "common farmers" to refrain from participating in the proposed Rail Roko programme of protesting farmers.
Chahar, Lok Sabha MP from UP's Fatehpur Sikri constituency, said that BJP will reach out to farmers and clear their confusion about farm laws and tell them about the benefits of the agricultural reforms brought by Modi government.
"Common farmer will not take part in the rail roko programme. I urge common farmers not to participate in it. You have seen earlier what kind of anarchy has taken place within this movement. People of one party are sending their workers in farmers' protest. People whose political ground has been eroded, who have not been able to challenge Prime Minister Narendra Modi are spreading propaganda and creating confusion among farmers," Chahar told media here.
Samyukta Kisan Morcha (SKM), a joint front of various farmer organisations, had on February 10 announced to organise 'Rail Roko' across India from 12 pm to 4 pm on February 18.
Chahar and other BJP leaders attended a meeting at Union Minister Sanjay Balyan's residence here. The meeting lasted for over 3 hours. Farmers mostly from Western Uttar Pradesh are camping at Ghazipur border while protesting against farm laws for nearly three months.
Attacking the Opposition parties, Chahar said, "The only reason the Opposition is creating confusion is that elections will be held in Uttar Pradesh and Punjab in 2022. If the farm laws get implemented, farmers will start getting the benefits and they will stand exposed. Our duty is to remove confusion from farmers' minds. We will be going to the village together and talk to the farmers."
Commenting on Congress leader Priyanka Gandhi's tweet on sugarcane farmers' plight, BJP leader said, "She has become a farmer just now. Her husband captured thousands of acres of farmers' land during Congress tenure at the centre. She should first ask her husband to return the land to the farmers."
The central government has offered to put the farm laws "on hold" for 12-18 months, an offer rejected by the farmers' unions protesting against the laws. Several rounds of talks have been held with farmers over their demand for the repeal of three new laws.
Farmers have been protesting at different borders of the national capital since November 26 last year against the three newly enacted farm laws: Farmers' Produce Trade and Commerce (Promotion and Facilitation) Act, 2020; the Farmers Empowerment and Protection) Agreement on Price Assurance and farm Services Act 2020 and the Essential Commodities (Amendment) Act, 2020. (ANI)