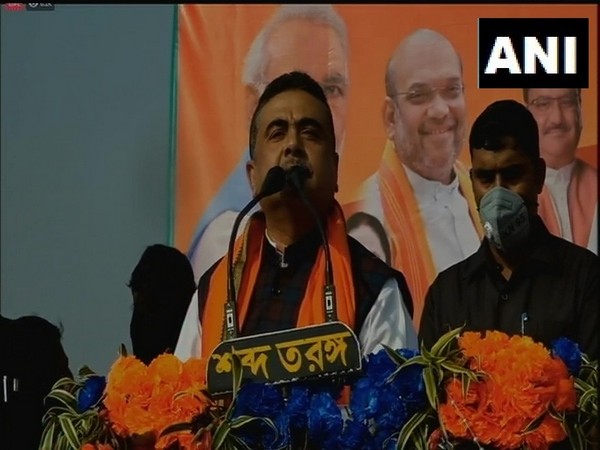 Hooghly/Paschim Medinipur (West Bengal) [India], January 21 (ANI): Bharatiya Janata Party (BJP) leader Suvendu Adhikari has said that the party has to work on 70 per cent of the electorate while claiming that poll strategist Prashant Kishor in a recent interview said that the ruling Trinamool Congress (TMC) has a "fixed deposit" of the remaining 30 per cent in West Bengal.
"Kishore who came to give them (TMC) wisdom, says on news channels that we have 100 per cent (votes) on our (TMC) side, BJP has to fight for 70 per cent (votes). Do you understand? They have 30 per cent fixed deposit. Will all 70 per cent come together? We will win," Adhikari said on Wednesday while addressing the supporters after a roadshow in Chandannagar in Hooghly.
Adhikari claimed that after losing 18 seats in the Lok Sabha polls, "She (Mamata Banerjee) has hired PK (Kishor) on a Rs 400-crore contract and she will witness the decimation of her party entirely."
In December, Prashant Kishor, who was roped in by Chief Minister Mamata Banerjee-led Trinamool Congress for the West Bengal Assembly Elections 2021, predicted that the BJP will struggle to cross "double digits" in the 2021 polls.
Meanwhile, Adhikari, who left TMC to join the BJP in December, continued his tirade at a rally in Pashchim Medinipur against Mamata Banerjee's government.
"I have said 'Tolabaaj Bhaipo' (Extortionist Nephew) and they (TMC) got angry saying why did not you say the name. Now I am saying the name. Lodge a case against me. Dilip da has called me to Kharagpur. Last time I had helped them (TMC) win from that turf. This time I will defeat them," he said.
"The SSC examination has not been conducted with regularity since the TMC administration became incumbent. A huge pool of the youth of Bengal is going around unemployed," he added.
The BJP has been aggressively campaigning in West Bengal over the past few months with top leaders Amit Shah, JP Nadda visiting the state.
Elections to 294 Assembly seats in West Bengal are slated to take place in the next few months. (ANI)