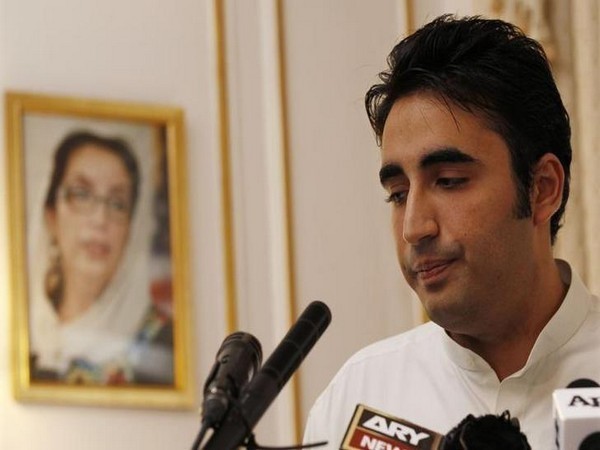 Karachi [Pakistan], January 17 (ANI): Pakistan Peoples Party (PPP) chairperson Bilawal Bhutto-Zardari has demanded foreign funding case against Prime Minister Imran be made public, stating that his party will only use constitutional and democratic means to remove the Pakistan Tehreek-e-Insaf (PTI) government.
"We want to establish the democratic rule in the country and will only use democratic ways to remove Imran Khan from power," Bilawal said at a press conference in Karachi on Saturday.
During the briefing, the PPP chairperson said that in terms of the country's economy and its health sector, "Imran Kahn government has failed and this is why the people are suffering. This is why we demand that they step down."
He also mentioned that anti-corruption body Transparency International says the "most corrupt government" in Pakistan is the PTI government.
Seeking details about the foreign funding case against Imran Khan's PTI, he said: "There are very serious allegations that PTI is a foreign-funded party. Their own member has raised allegations. But unfortunately, whether it is the court or the election commission, the truth has not been put forth before the people."
"This is why the Pakistan Democratic Movement (PDM) will protest on January 19 outside the Election Commission of Pakistan and will demand that the case be taken to its conclusion and all the facts of the case be made public," Bilawal said.
He asserted that the public must be made aware of the countries that "gave so much money to PTI".
He said he believes "if such a senior member has provided proof of such a serious allegation", the truth of these allegations should have been put before the public by now, The News International reported.
The foreign funding case against PTI in November 2014 was registered by Akbar S Babar, one of the founding members of the party, alleging major financial irregularities in the party's accounts.
The allegations made by Babar included illegal sources of funding, concealment of bank accounts in the country and abroad, money laundering, and using private bank accounts of PTI employees as a front to receive illegal donations from the Middle East, Dawn reported.
The Pakistan Democratic Movement (PDM), an 11-party opposition alliance, has demanded the resignation of the Prime Minister by January 31.
Pakistan Muslim League (Nawaz) (PML-N) Vice President Maryam Nawaz and Bilawal Bhutto-Zardari are among major leaders who have said that they will send the Imran-led government packing and have organised several PDM rallies including those in Peshawar, Gujranwala, Karachi, Quetta, Multan, and Lahore since October 16, 2020. (ANI)