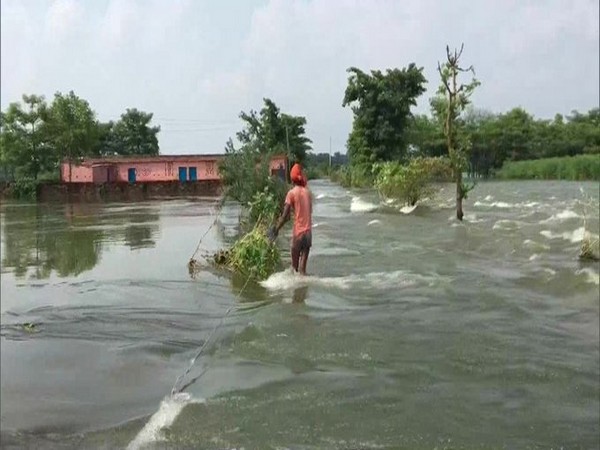 Muzaffarpur (Bihar) [India], Aug 2 (ANI): The Minapur block of the Muzaffarpur district in Bihar continued to face flood fury after a rise in the water level of the Burhi Gandak river following the rains.
Speaking to ANI, a local Rameshwar Chowdhury said, "So much of water has entered here and there are no arrangements for boats. The whole village is submerged."
"This is the water of Gandak river which has entered our village," said another local resident.
The villagers in Muzaffarpur's Sahebganj continue to suffer days after the waters from Burhi Gandak river, a tributary of the Ganga, caused a flood situation in parts of Bihar.
Earlier on August 1, Guddu Yadav, a resident of Sahebganj had said, "As many as 500 families are impacted due to flood in the area. The government is hardly doing anything to help us."
"The whole village has been flooded with water. Houses are submerged and there is no place to stay except the rooftop," Shiv Chander Patel had said.
Awadh Kishore Ram, another villager had said, "If someone gives us food, we eat it otherwise we do not have anything to eat."
According to the state disaster management department, 49,05,007 people are affected due to floods while 13 have died in the state.
The Central Water Commission (CWC) had said that high water levels of the Burhi Gandak river in the Muzaffarpur district have resulted in floods in the low-lying areas on its banks.
Owing to the breakdown of the ring dam of Budhi Gandak river, people in urban areas of the district have either started borrowing boats or making their own boats to go to a higher place. (ANI)