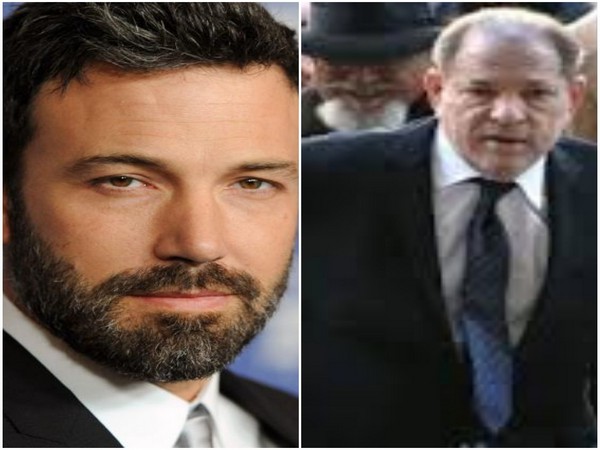 Washington D.C. [USA], Mar 11 (ANI): Hollywood actor Ben Affleck's name was present on Harvey Weinstein's 'red flag list'. The list was mentioned in the newly unsealed documents presented at the New York City criminal courthouse.
According to Variety, 'The Red Flag List' was unearthed in the unsealed court papers on Tuesday (local time). Around 70 names are on the list including Affleck and Annabella Sciorra. This is in addition to the name of the accusers Rose McGowan, Zelda Perkins, Lysette Anthony, and Rowena Chiu.
The names of Weinstein's former assistant Irwin Reiter, 'Russian Doll' creator Leslye Headland, Donna Gigliotti, Jason Blum, and producers Megan Ellison, and Jennifer Todd were also on the list.
Documents also contained nasty messages about Jennifer Aniston, and various desperate pleas to powerful agents, network executives, and billionaires. This included the names of Michael Bloomberg and Jeff Bezos to help save his career.
The list was a part of roughly 1,000 pages of documents that were unsealed at the New York City criminal courthouse during Weinstein's seven-week trial.
Weinstein kept a list of names of people as he was concerned in the year 2017, they must be talking to journalists in 2017 about his sexual conduct with women.

Harvey Weinstein courted controversy after a serious of sexual misconduct allegations were cited against him, which led to the inception of the #MeToo movement. (ANI)