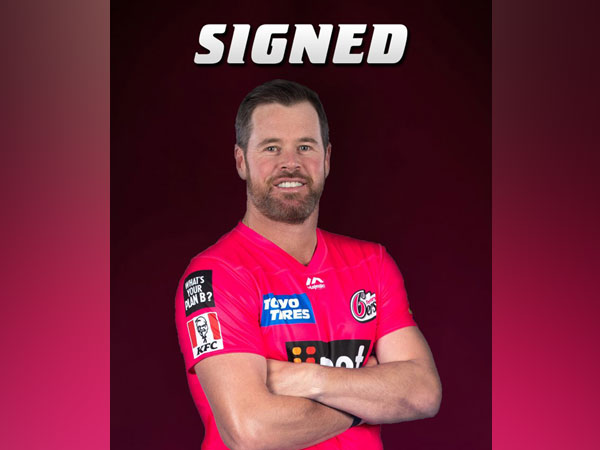 Sydney [Australia], September 18 (ANI): Defending Big Bash League (BBL) champions Sydney Sixers on Friday signed Australian all-rounder Dan Christian to boost the batting depth in the squad.
Christian, who is currently captaining Nottinghamshire in the Vitality Blast - England's premier domestic T20 tournament - for the fifth straight year, joins the Sixers after a two-season stint at the Melbourne Renegades.
In a storied career, the 37-year-old has played for NSW, South Australia and Victoria as well as Brisbane Heat, Hobart Hurricanes and the Renegades in the BBL. He has also plied his trade for four English county clubs, four IPL franchises and in the Caribbean Premier League, South African Super League and Pakistan Super League.
The power-hitting medium-pacer grew up in Narrandera in the Riverina and is a proud man from the Wiradjuri mob who moved to Sydney after finishing primary school.
The move back to the Harbour City will allow Christian to play alongside some long-term mates like inspirational Sixers skipper Moises Henriques, in a place he feels at home.
"You don't always get your fairy tales in sport but having played this T20 format for a long time this sounded like a good opportunity to bookend my career at home," Christian said in a statement.
"Although I am not saying this will definitely be my last contract, the chance to come back and play at the SCG with guys like Moises (Henriques) and under (head coach) Greg Shipperd was too good to miss. Moises and I first played some colts cricket together and then went on to play together for NSW, Australia and Bangalore in the IPL. We've known each other for a really long time and are great mates. We have played a lot of cricket together and against each other and played a lot of golf together. We still try to whenever we are in the same city," he added.
Christian has yet to speak in-depth to skipper Moises Henriques and head coach Greg Shipperd about his responsibilities at the defending champions but is confident in the skill set he brings to the club as one of the planet's most experienced T20 players, including his ability to help mentor the Sixers' younger players.
"I haven't talked to Shippy and Moises too much about a role yet but having watched the Sixers a lot over the last few years and understanding their strengths, I hope I can bowl a few overs when needed and strengthen that finishing role with the bat to help close those last 5 or 6 overs out," Christian said.
"Once you get to my age it just happens to be in that mentoring role, being approached about how you think in certain situations, how you plan for certain scenarios. I enjoy that and if that opportunity happens I'm more than willing to contribute what I can in that area," he added.
Shipperd said Christian was a prized signing for the Sixers.
"I'm thrilled that we could add Dan to our championship-winning squad. He's one of the most sought after T20 players globally and will bring a wealth of experience and all-round skills to our group," Shipperd said.
"Our goal is to keep improving and we think bringing his aggression and knowledge will be great for the balance of the team. Dan also adds to our leadership strengths and I'm confident he will bring forward some enlightening thoughts on the game," he added.
The Sixers' BBL squad now consists of 16 players: Sean Abbott, Jackson Bird, Dan Christian, Tom Curran, Ben Dwarshuis, Jack Edwards, Mickey Edwards, Moises Henriques (c), Daniel Hughes, Hayden Kerr, Nathan Lyon, Ben Manenti, Stephen O'Keefe, Josh Philippe, Lloyd Pope, Jordan Silk. (ANI)