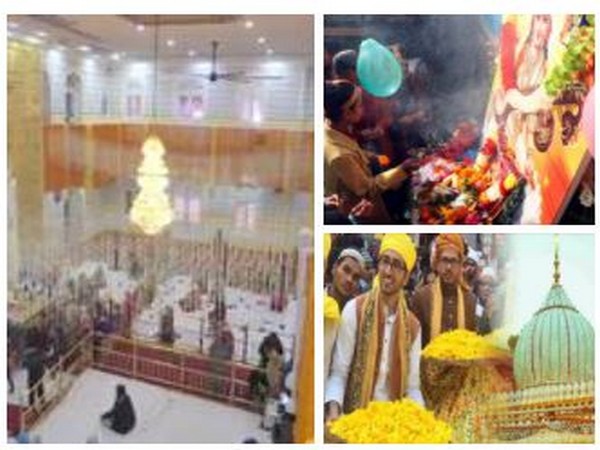 New Delhi [India], February 15 (ANI): Basant Panchami, also known as 'Vasant Panchami', marks the arrival of the spring season in India. The day will be celebrated on February 16 this year. While, this occasion marks the day to worship the deity of knowledge, music, and arts in Hindus, the lesser-known fact is that this day has significance in Sikh and Muslim religions too.
ANI spoke to the head priests and spiritual leaders to find about the significance of the special day and how it is celebrated across India.
Mahant Vikas Sharma, head priest of Hanuman Mandir, Connaught Place told ANI, "When Brahmadev created this universe, it was beautiful but silent. After Lord Narayana requested Brahmadev to bestow the universe with its voice, he sprinkled water from his kamandal and henceforth deity Saraswati originated."
"It was Magh Panchami date according to Hindu shastra when she originated. After that, the universe got its first voice," he added.
Reflecting back to ancient times, Mahant also told that students at Gurukuls were taught their first word on this day, the same way students nowadays learn the alphabet 'A' in their nursery class.
Associated with yellow colour, the festival of Basant Panchami also marks the start of preparation for Holika and Holi, which occurs nearly 40 days later.
Mahant Vikas Sharma also told the story behind the importance of colour yellow and said, "Yellow and white colour are given preference on this day to please Goddess Saraswati. Mata Saraswati's favourite colour is yellow and white, in Hindu shastra, this colour is referred to as 'Gyan Chakra', the colour of knowledge".
Basant Panchmi, the prominent festival of Hindus, was adopted by Indian Muslim Sufis in the 12th century to mark the grave of the Muslim Sufi saint dargah of Nizamuddin Aulia in Delhi and ever since, has been observed by the Chishti order.
Speaking about the significance and history of the day, Head Malawi, Nizamuddin Dargah told ANI, "Nizamuddin Aulia went in depression after his son-like nephew died. Amir Khusrau saw Hindu women dressed in the yellow ensemble were carrying yellow flowers to a temple on Basant Panchami. He adopted this practice, got dressed in yellow, and started singing in order to bring Nizamuddin Aulia back to his senses."
"This act of him brought the smile back on Nizamuddin Aulia's face. Hence to celebrate this day, Basant Panchami is celebrated by the Muslim religion too," he added.
On the other hand, Namdhari Sikhs have also celebrated Basant Panchami to mark the beginning of spring. Other Sikhs treat it as a spring festival, and joyfully celebrate it by wearing yellow coloured clothes, emulating the bright yellow mustard flowers in the fields.
Giani Gurnek Singh, the Granthi of Delhi Gurudwara, Sri Gurmat Prachar Sabha said, "Maharaja Ranjit Singh, the founder of the Sikh Empire, encouraged the celebration of Basant Panchami as a social event. He used to give 2,000 rupees to the Harmandir Sahib Gurdwara in Amritsar to distribute food."
The annual Basant fair was also celebrated during 1825 CE. "Maharaja Ji would also hold a darbar on Basant Panchami where soldiers would dress in yellow and show their military powers, he added.
In the southern states of India, the festival is celebrated as Sri Panchami. Yagnas are done in schools and colleges as students celebrate with great sincerity and fervour. It is believed that Goddess Saraswati bestows her devotees with lots of wisdom, learning, and knowledge, as the goddess is considered to be the epitome of wisdom.
Students and teachers wear new clothes, offer prayers to the goddess of knowledge, and various programs of song and dance are organised to please her. Usually, toddlers start learning from this day in a unique ceremony named 'Khadi-Chuan'/Vidya-Arambha. (ANI)