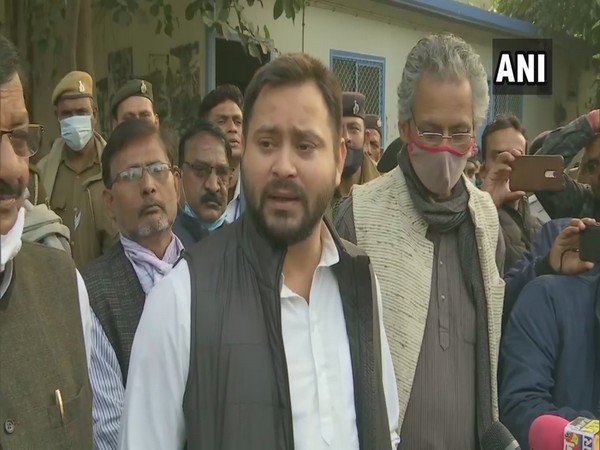 Patna (Bihar) [India], January 10 (ANI): Rashtriya Janata Dal (RJD) leader Tejashwi Yadav on Sunday launched a scathing attack on Bihar Chief Minister Nitish Kumar, alleging that Kumar came to power through the back door and was "a bargainer, a blackmailer, not a leader."
"It is tit for tat. If you look at Nitishji's history, be it George Fernandes, Digvijay Singh or our party-- whom did he not betray? He came to power through the back door. He has a thirst for power. The destruction of Bihar by him is for everyone to see. Nitish Kumar is a bargainer, a blackmailer. He is not a leader. He is not for people, he is for himself," Yadav told reporters.
The statement comes a day after the Bihar Chief Minister said that he could not understand who was his friend and who was his enemy before the state Assembly elections and hence the party suffered massive losses in the elections held in November 2019.
Earlier on Saturday, Kumar in a cryptic message to its ally, the Bharatiya Janata Party, had said, "We failed to anticipate who our friends were and were not, and on whom we should have trusted. After the election campaign, we got to understand that things were not conducive for us but by that time it was too late."
Leader of Opposition in Bihar Assembly Tejashwi Yadav said that all parties of Mahagathbandhan (grand alliance) will form a human chain on Martyrs' Day on January 30.
"We have decided that on Martyrs' Day all parties of Mahagathbandhan will form a human chain. It will be done till Panchayat level," he said.
Attacking the Bihar government, Yadav said, "The government is trying to make those residing in villages and indulging in farming unemployed; youth are unemployed despite having a degree. Schools/colleges have reopened, everything is on track. When the biggest problem is before us, you do not want Vidhan Sabha to function. If Budget Session is not held in the traditional manner, the entire Opposition will boycott it, as it would not have any meaning. After 2006, farmers have started becoming labourers. In Bihar, migration has not stopped. This is a major issue."
The date of the Budget Session of Bihar Assembly is yet to be announced. Last year, it began on February 24. (ANI)