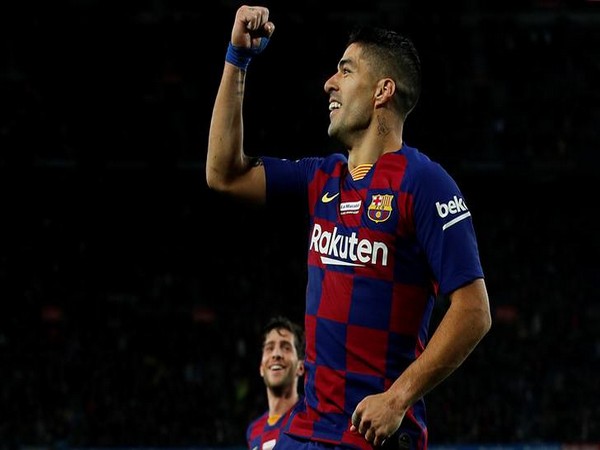 Barcelona [Spain], July 9 (ANI): As La Liga 2019-20 season comes near to its conclusion, Barcelona striker has said that the side needs to be ready if Real Madrid slip-up.
Currently, Real Madrid is just one point clear of Barcelona at the top of the La Liga standings.
"What we have to do is win our next three games. Whatever Madrid does is up to them. If the rival drops points then fantastic, we have to think about being there if they do," Goal.com quoted Suarez as saying.
Suarez's remark came as he helped the defending champions Barcelona keep their slim title hopes alive with a 1-0 victory over rivals Espanyol on Wednesday (local time).
However, the side was not at their best against Espanyol, but the side managed to extend their unbeaten run to nine games following back-to-back triumphs.
"We knew it was going to be difficult. We knew their situation. We have to be aware of the fact that we put in a great performance on Sunday and were still feeling the consequences of that physically. The important thing is to win and to get three more points," Suarez said.
"I think if I didn't score in the first half or Barcelona didn't create more chances, that's the virtue of the rival, who was very well organised," he added.
Suarez scored the only goal of the match in the 56th minute.
Both Real Madrid and Barcelona will be in action on Saturday, July 11.
Madrid will lock horns with Alaves while Barcelona will take on Valladolid. (ANI)

9 thoughts on “Barcelona must be ready if Real Madrid slip-up: Luis Suarez”