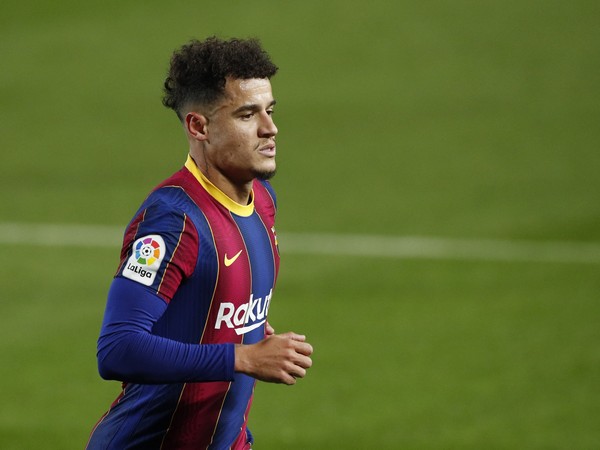 Barcelona [Spain], December 30 (ANI): Barcelona midfielder Philippe Coutinho is set to undergo knee surgery after sustaining an injury during Tuesday's clash against Eibar.
The Brazilian came in the 66th minute of the 1-1 draw against Eibar in place of Miralem Pjanic but was unable to complete the game due to his injury which he picked up in injury time in the second half, leaving Barca with 10 men as they had already used their five permitted substitutes.
"The tests carried out on the first team player Philippe Coutinho have shown that the midfielder has an injury to the lateral meniscus in his left knee. Treatment will necessitate arthroscopic surgery which will take place in the coming days," the club said in a statement.
A lengthy absence for Coutinho would be another blow for Barca boss Ronald Koeman, who is already without Ansu Fati, Sergi Roberto and Gerard Pique through injury.
This season Coutinho has made 14 appearances for Barca, scoring three goals and creating two assists.
The draw with Eibar saw the Catalans slip to sixth in the table, seven points adrift of joint leaders Atletico Madrid and Real Madrid.
After the game, manager Roland Koeman admitted that it is "very difficult" for his side to win this season's La Liga.
"I am realistic, it will be very difficult to be champions. Nothing is impossible, but you have to acknowledge the gap. Atletico look very good to me, very strong, they don't concede many goals," Goal.com quoted Koeman as saying. (ANI)