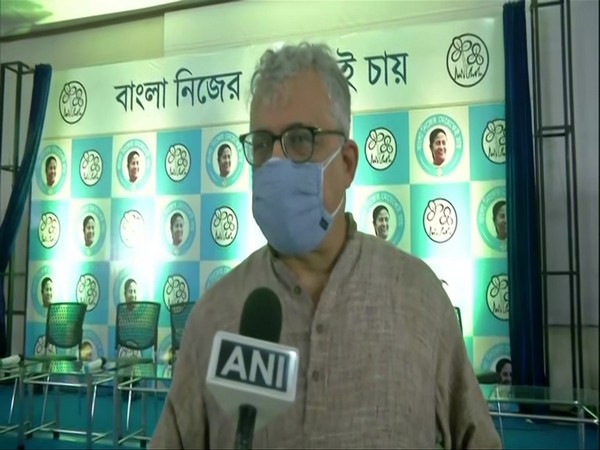 Kolkata (West Bengal) [India], February 20 (ANI): Portraying Chief Minister Mamata Banerjee as the daughter of Bengal, Trinamool Congress (TMC) MP Derek O'Brien on Saturday said the party's slogan "Bangla Nijer Meyekei Chaye" (Bengal wants its own daughter) is for people to interpret.
"The slogan is out there. 'Bangla nijer meyekei chaye' is for the people to interpret. A lot of good work has happened in the last 10 years whether it is infrastructure, education, health or industry. Now with upcoming polls, we have put it into four words. It is a simple, forward, honest and positive message," O'Brien told ANI.
"It is a very simple four-word message. Even for those people who live in Bengal, but whose first language is not Bengali, they can also clearly understand this message," added the senior TMC leader.
With the Assembly election knocking on the door, the ruling TMC launched the slogan 2021 "Bangla nijer meyekei chaye" on Saturday at Trinamool Bhawan in Kolkata.
TMC top brass Sukhendu Sekhar Ray, Derek O'Brien, Subrata Bakshi, Kakoli Ghosh Dastidar, Subrata Bhattacharya and Partha Chatterjee were present at the launch.
Amidst the debate of 'insider' versus 'outsider' in the political spectrum of poll-bound West Bengal, TMC's new slogan articulates that nuance.
Elections for 294 Assembly seats in West Bengal are likely to take place in April-May this year. (ANI)