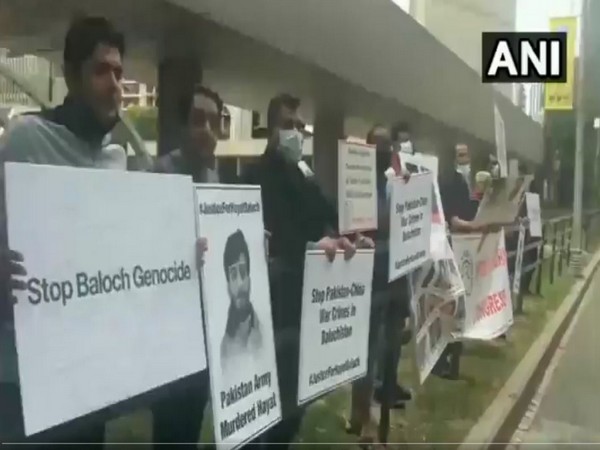 Toronto [Canada], Aug 31 (ANI): Members of Baloch, Sindhi and Pashtun organisations staged a protest on Sunday in Toronto to mark the 'International Day of Victims of Forced Disappearances', demanding the United Nations and international community to press Pakistan to end forced disappearances, enforced conversion to Islam and extrajudicial killings.
The leaders and members of Baloch National Movement, Canada Pashtun Council, Pashtun Tahaffuz Movement and World Sindhi Congress gathered in downtown Toronto and raised slogans like 'Pakistan Army Terrorist, ISI Terrorist'. They called Pakistan Army an "occupied Army of Pakistan, Balochistan and Sindh."
The protestors urged the Canadian government to pressurise Pakistan for reinstating human rights for Baloch, Sindhis, Mohajirs and Pashtuns. They held banners that read 'stop Baloch genocide' and 'stop enforced disappearances in Balochistan'.
The demonstrators met with "Free Hong Kong" protestors and together they raised slogans against Pakistan and China.
An activist said, "We have gathered here on the day of International Day of Forced Disappearances to protest against enforced disappearances. This has destroyed our lives and it's affecting the present generation and will continue to impact the future generation as well. This practice will continue until terrorist state Pakistan exists on the map. We demand the international community to take note of the human rights abuses committed by Pakistan and put an end to enforced disappearances."
Echoing similar sentiments, another activist said, "China is equally involved in war crimes in Balochistan and other parts of Pakistan, like the Pakistan Army and its intelligence service. The People's Liberation Army of China, Pakistan Army and its intelligence service are equally guilty for the war crimes in Pakistan."
Several protests against Pakistan were organised across the world on the occasion of the International Day of Victims of Forced Disappearances.
Scores of people protested outside the Pakistan consulate in New York against the forceful abductions of people from the minority communities in Pakistan by its Army and intelligence.
The Free Balochistan Movement staged a protest against enforced disappearances in Balochistan by Pakistani establishment outside the official residence of UK Prime Minister Boris Johnson in London. A similar anti-Pakistan demonstration was also organised by the Sindhi Baloch Forum in front of the UK Parliament. (ANI)